Will the planet destroy humanity before we destroy the planet

On Tuesday 2 November James Lovelock, the 102-year-old originator of the Gaia theory and independent scientist, environmentalist and futurist, wrote in The Guardian: … I don’t know if it is too late for humanity to avert a climate catastrophe, but I am sure there is no chance if we continue to treat global heating and the destruction of nature as separate problems…

I do not know either

And yet I believe that various global change aspects do influence and strenghten each other. Several years ago, Rockström et al. [2009] argued that identifying and quantifying planetary boundaries that must not be transgressed could help prevent human activities from causing unacceptable as well as irreversible environmental change. Unfortunately, at that very moment three out of nine interlinked planetary boundaries had already been overstepped. Moreover, since these boundaries are linked, exceeding one has implications for others in ways that the authors of the paper did not completely understand.

Lovestock [2021] complains about the lack of logic: … That is the wrongheaded approach of the United Nations, which is about to stage one big global conference for the climate in Glasgow, having just finished a different big global conference for biodiversity in Kunming… His comment is absolutely right, we have known for quite some time that the majority of climate change models indicate alarming consequences for biodiversity, with the worst-case scenarios leading to extinction rates that would qualify as the sixth mass extinction in the history of our planet [Bellard et al. 2012].

Biodiversity loss occurs at both the local and regional levels. It can have pervasive effects on how the Earth system functions, and it interacts with several other planetary boundaries [Rockström et al. 2009]. For example, loss of biodiversity can increase the vulnerability of terrestrial and aquatic ecosystems to changes in climate and oceanic acidity, thus reducing the safe boundary levels of these processes. There is now growing understanding of the importance of functional biodiversity in preventing ecosystems from tipping into undesired states when they are disturbed [Folke et al. 2004]. The combined and often synergistic effects of the pressures can make ecosystems more vulnerable to changes that previously could be absorbed. As a consequence, ecosystems may suddenly shift from desired to unwanted states in their capacity to generate ecosystem services.

Global warming concerns each one of us

For billions of years the Earth’s surface temperature has been determined mainly by the radiant heat coming from the sun. This energy increased over time because it is the nature of stars like the sun to increase their heat output as they grow older. But temperatures on Earth remained relatively stable thanks to forests, oceans and other elements in the Earth’s regulating system, which kept the surface temperature fairly constant and near optimal for life. 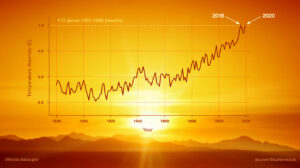 Global warming has included extra heating due to the extraction and burning of fossil fuels since about the middle of the 19th century. This, among other things, releases greenhouse gases such as methane and carbon dioxide into the atmosphere. They absorb radiant heat and stop it escaping from Earth and this is what causes global warming. Moreover, the amount of global warming depends hugely on the properties of water. When cold ice forms, much of it is white snow that reflects the sunlight back to space and it has a cooling effect. But when water is warm, the water vapour in the air is a powerful greenhouse gas that heats up the planet.

We are entering into a heat age in which the temperature and sea levels will be rising decade by decade until the world becomes unrecognisable. We could also be in for more surprises since nature is non-linear and unpredictable.

Lowering these risks and adapting to those we can no longer avoid will require drastic reduction of the burning of fossil fuels. There is no choice or we will face even worse consequences.

I am not hopeful of a positive outcome at Cop26, knowing who is participating says Lovestock [2021], and I myself am certainly not in a position to praise the Belgian approach. In fact, there is not even a Belgian approach: what we see is that the regions are fighting each other rather than working together. They have clearly not read the book Supercooperators by Martin Nowak [2011]! We had better learn to live in partnership with the Earth, otherwise the planet Earth will unconsciously and irrevocably move into a new state in which humans are no longer welcome.

Covid-19 may well have been the most recent negative warning.