This is most unexpected. Investigations carried out on polar bear and killer whale blubber are exceptional, if only because these animals are so difficult to approach. Polar bears are the world’s largest land predators. They top the food chain in the Arctic. Killer whales prey on just about any animal they find in the sea, in the air above the water or along the coast. Their name is most appropriate since they are able to take down large marine animals. 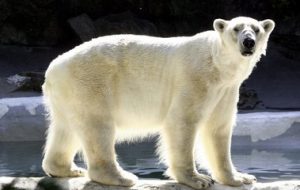 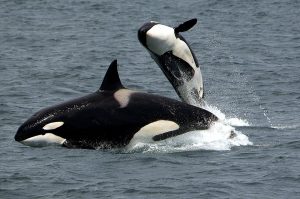 Since the 1970s, the implications for environmental and human health of persistent organic pollutants (POPs) have been very much at the centre of public and scientific concern. POPs constitute a suite of different chemicals including chlorinated hydrocarbons (e.g. the pesticides, chlordanes, mirex and hexachlorocyclohexanes), industrial chemicals (e.g. polychlorinated and polybrominated biphenyls, as well as the dioxins and furans which are by-products of biphenyl production), brominated hydrocarbons (e.g. the brominated flame retardants), fluorinated compounds (e.g. perfluorooctanesulfonic acid) as well as non-halogenated, emerging chemical contaminants (e.g. phthalates and bisphenols). Because of their pronounced resistance to degradation and lipophilicity they accumulate in adipose tissue[1] and concentrate along food webs, with highest levels being found in top predators such as the polar bears and killer whales.

POPs bio-accumulate and bio-magnify in ecosystems (highest levels are found in top predators) and their negative effects increase accordingly. We humans are exposed to these same chemicals in a variety of ways, mainly through the food we eat, but also through the air we breathe outdoors, indoors and at our places of work. Many products used in our daily lives contain POPs, which were added to improve the products’ characteristics; this is, e.g., the case with flame retardants or surfactants. As a result, POPs can be found virtually everywhere on our planet in measurable concentrations. Human exposure can lead, among other effects, to increased cancer risk, reproductive disorders, alteration of the immune system, neuro-behavioural impairment, endocrine disruption, geno-toxicity and increased birth defects [WHO – http://www.who.int/ ]. So, checking for the effects of highly complex contaminant cocktails is an absolute necessity. The whole world is exposed to them, but no one really knows how dangerous they are. Assessing their risks is a major challenge for the 21st century.

Today, toxicity studies mostly use single chemical exposures. This inadequately represents the real world situation of complex mixtures of the widely known and unknown, the natural and anthropogenic chemicals. Single compound exposure and effect studies are important to assess the risk of individual, legacy and emerging contaminants. However, every mixture contaminant may individually increase (or decrease) the adverse health effects of certain other compounds. But the question of how the contaminants interact remains largely unanswered and even largely unexplored. This question is a challenging one and is becoming increasingly alarming in a world that is awash with chemicals [Carpenter et al. 2002].

The chemical industry has substantially increased its productivity over time and has distinguished itself by holding on to the resulting profitability gains, unlike many other industries. Professor Hideaki Chihara (1927 – 2013), an esteemed Japanese chemist and former president of the Japan Association for International Chemical Information, spoke as follows to his audience when Chemical Abstracts Service announced that on September 7, 2009 it had recorded the 50 millionth substance “… Achieving a milestone of 50 million small molecules registered, which I congratulate CAS for, has given us two major insights; one is that a novel substance is either isolated or synthesized every 2.6 seconds on the average during the past 12 months, day and night, seven days a week in the world, showing an almost unbelievable rate of progress in science…”.

There is little doubt that we all live in a chemical soup and in a soup of exposures. The American toxicologist Linda Birnbaum already put forward this message in 2012 [Borrell 2012].

Why then focus on the effects of the pure chemical? To study the exposure to one single chemical agent is to study a far too simplistic exposure situation. Many scientists have convincingly evidenced that the effects of mixtures differ from the sums of their individual effects [Pape-Lindstrom & Lydy 1997; Kortenkamp 2009;Laetz et al. 2009; Delfosse et al. 2015; Krepker et al. 2017]. It is stated that exposure to mixtures will result in either greater than additive responses (synergism or interactive joint toxicity) or less than additive responses (antagonism). The “contaminants’cocktail” concept remains a broadly misunderstood and insufficiently researched concept with a strong social resonance. Now is the time to invest in studies on the cocktail effects of pollutants.

Originally, a great deal of attention was paid to pesticides, the chemical substances that are used to kill or repel biological organisms [de March 1987]. This diverse group includes insecticides, herbicides, fungicides, nematicides, acaricides, rodenticides, avicides, wood preservatives, and antifoulants. Mixtures of pesticides are commonly applied in the human food production, both offshore (fish and crustacean farms) and onshore (agriculture and livestock production). Assessing the cumulative toxicity of pesticides in mixtures is therefore an enduring challenge, all the more because several combinations of pesticides were lethal at concentrations that were sublethal in single-chemical trials [Laetz et al. 2009].

Kortenkamp [2007] argues “… that accumulated evidence seriously undermines continuation with the customary chemical-by-chemical approach for risk assessment of endocrine disruptors (EDs)…”. Instead, he recommends to seriously consider group-wise regulation of classes of EDs. Future research should focus on investigating the effects of combinations of EDs from different categories, with considerable emphasis on elucidating mechanisms. This strategy will generate better-defined criteria for grouping EDs for regulatory purposes. Moreover, Gore et al. [2015] once more stressed the need not to deal lightly with EDs. Their statement is based on a comprehensive review of the literature on seven topics for which there is strong mechanistic, experimental, animal, and epidemiological evidence for endocrine disruption, namely: obesity and diabetes, female reproduction, male reproduction, hormone-sensitive cancers in females, prostate cancer, thyroid, and neurodevelopment and neuroendocrine systems. It also includes thorough coverage of studies of developmental exposures to EDs, especially in the foetus and infant, because these are critical life stages during which perturbations of hormones can increase the probability of a disease or dysfunction later in life. The authors conclude that publications over the past 5 years (prior to 2015) have led to a more complete understanding of the endocrine principles by which EDs operate, including non-monotonic dose-responses, low-dose effects, and developmental vulnerability.

Delfosse et al. [2015] have demonstrated that a pharmaceutical oestrogen and a persistent organochlorine pesticide, both exhibiting low efficacy when studied separately, cooperatively bind to the pregnane X receptor[2], leading to synergistic activation. Biophysical analysis shows that each ligand enhances the binding affinity of the other, so the binary mixture induces a substantial biological response at doses at which each chemical is individually inactive. High-resolution crystal structures reveal the structural basis for the observed cooperativity: it is suggested that the formation of supramolecular ligands within the ligand-binding pocket of nuclear receptors contributes to the synergistic toxic effect of chemical mixtures.

A few examples by way of illustration. Pesticides represent an increasingly ubiquitous form of environmental contamination. Moreover, there is more epidemiological evidence to link pesticides with obesity, diabetes, insulin resistance and non-alcoholic fatty liver disease [Lukowicz et al. 2018, and references herein]. Consumers are exposed to mixtures of pesticides at low doses through their food consumption. The consequences however of such a chronic exposure on metabolic homeostasis are not well described, and therefore not well known [EFSA 2015]. Lukowicz et al. [2018] used a pesticide cocktail that may be commonly found in apples on the European market to evaluate the metabolic consequences of chronic dietary exposure to a pesticide mixture at nontoxic doses relevant to consumer risk assessment. A pesticide cocktail was therefore incorporated in a standard chow at doses exposing laboratory mice to the tolerable daily intake of each individual pesticide. The results of the study have demonstrated metabolic disturbances in vivo that differ as a function of sex. Males exposed to the pesticides gained weight and became diabetic, whereas females were protected from these effects but displayed other disturbances, e.g. oxidized glutathione liver ratio and perturbations of gut microbiota-related urinary metabolites. These observations give weight to the idea of a plausible link between pesticides and health, and support recent epidemiological findings that demonstrate an inverse relationship between the high consumption of organically farmed products and the probability of developing metabolic syndrome.

The Lukowicz et al. [2018] study made use of laboratory animals. There is however a tendency to reduce animal models for toxicity testing. This gave rise to in vitro exposure experiments for contaminant risk assessments. In vitro experiments uniquely allow for the evaluation of species specific effects; they allow for rapid detection of direct contaminant effects on the immune system. Desforges et al. [2017] made use of in vitro investigations with the real world situation of complex mixtures of both the well-known as well as unknown contaminants, reflecting the burden accumulated over a lifetime. The complex mixtures showed lower effect levels relative to single compounds. While more work is needed to better define and extrapolate exposure metrics for in vitro studies, the results using blubber-derived contaminant cocktails add realism and complexity to in vitro exposure experiments and confirm the immunotoxic risk faced by marine mammals when exposed to environmental contaminants.

Studying polar bear and killer whale blubber is not as crazy as you may think. It is quite simply the  realistic thing to do. And do you want to know why? Polar bears, killer whales and humans are neighbours on the higher trophic levels. Also, there are plenty of new, unstudied contaminants lurking around every corner. We have now largely exceeded the number of 50 million chemical substances.

[1] Adipose tissue is a connective tissue in which fat is stored and which has the cells distended by droplets of fat [Merriam Webster].