Trees should not be viewed as individuals, but as communities bound up in a complex set of ecological relationships

A tree’s most important means of staying connected to other trees is a “wood wide web” of soil fungi that connects vegetation in an intimate network that allows the sharing of an enormous amount of information and goods.

A few years ago, I bought a book by Peter Wohlleben, put it aside and forgot about it. Now it is on my desk and I have become really passionate about The Hidden Life of Trees, originally published in German and translated into dozens of languages including Dutch [Wohlleben 2015]. The author shares his passion for woods and forests and explains the striking processes of life, death, and regeneration he has observed in the woodland and the amazing scientific processes behind these exceptional events. 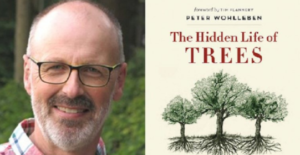 Much like human families, tree parents live together with their children, communicate with them, and support them as they grow, sharing nutrients with those who are sick or struggling and creating an ecosystem that mitigates the impact of extremes for the whole group [Gagliano et al. 2012]. As a result of such interactions, trees in a family or community are protected and can live to be very old. On the other hand, solitary trees, like street kids, have a tough time and often die much earlier than those in a community.
The author raises a number of questions, yet the answers to those questions are all but simple, they encourage reflection. Here is an example of the questions Wohlleben addresses.

How does the water get into the forest?

Gravity causes the water to flow to the lowest point. We all know that land and vegetation rise above sea level and that water flows to the sea. So, why don´t the continents dry up? This does not happen because clouds form over the sea and are carried by the wind. However, this mechanism only works well up to 600 kilometres from the coast. Further inland the climate becomes drier, because the clouds have emptied and disappeared. Without any additional force, life would only be possible in a narrow strip on the outside of the continents; the interior would be desolate and barren.

Fortunately, we have forests, which by the way we had better stop clearing and felling, because they are the vegetation form with the largest leaf surface. Some 27 square meters of foliage and needles form for every square meter of forest. Part of the precipitation remains on top of the trees and quickly evaporates again. Additionally, forests consume 2500 cubic meters of water per square kilometre during summer, which they release into the air through their respiration. The huge amounts of exhaled water vapour form new clouds that move inland and provide raindrops further on. This goes on and on and even the most remote places are still supplied with (some) moisture.

Forests are exceptionally efficient water pumps and constitute a mechanism that does not require any energy at all. They ensure that raindrops can travel for free over very long distances. The only condition is that there must be forests from the seaside to the most remote regions. This reminds me of Edward O. Wilson. In order to stave off the mass extinction of our planet (both vegetal and animal life) we must move swiftly to preserve the Planet´s biodiversity. In his visionary blueprint for saving the planet (Stephen Greenblatt in the preface) Wilson [2016] argues for half the surface of the Earth to nature.

Anastassia Makarieva and her colleague conducted research in different forests all over the world and invariably arrived at the same conclusions. Whether they studied the rainforest or the Siberian taiga, it was always the trees that passed on the vital moisture. This research team also concluded that the whole system collapses when coastal forests are cut down. In Brazil, the consequences are already there for all to see: the Amazon rainforest is becoming increasingly dry. Central Europe is still within the 600-kilometre zone and therefore within the suction range of the water pump. And we are very lucky that there are still forests there. They are however becoming sparser and replacement of the natural forest cover by a low leaf index vegetation is leading to significant reductions of the mean continental precipitation and runoff, in contrast to the previously available estimates made without accounting for the biotic moisture pump [Makarieva & Gorshkov 2007]. I can only repeat once more what I have said a number of times before: to replace depleted forests takes much more than simply planting trees!

Moreover, the conifers of the northern hemisphere have something else they can use to influence the climate and water balances. They emit terpenes, substances that were originally used to ward off diseases and parasites. If these molecules come into the air, moisture condenses on them. As a result, clouds are formed that are twice as dense as those over unforested surfaces. The chance of rain increases and about 5 % of the sunlight is reflected. Hence, the local climate becomes cooler and conifers simply love cooler conditions.

Can trees LOVE their local climate?

The Hidden Life of Trees infuriated professional forestry scientists while it was hailed by lay readers, who seem better able than forestry professionals to intuitively grasp the need for an ecological approach to forest management.

The reason for this divided response is that the strenght of Wohlleben´s argument heavily depends on eliciting an emotional response from readers through its powers of suggestion. As the author concludes, if we understand the capabilities of plant life and learn to recognize the trees’ emotional lives and needs, then we will also begin to treat plants differently, will cease to view forests as lumber factories, and will understand how forests can serve as oases of respite and recovery for us. His argument is intended to make us appreciate the benefits to us all as well as to the trees of leaving the forests undisturbed.

Our approach should change now. And if you do not believe me then maybe you will believe the famous French sociologist and philosopher, Edgar Morin, and what he says about industrial developments devastating not only the biosphere itself, but also humanity. If we do not change our ways, we will be plunging into the abyss [Morin 2007].