The “swimmer pollution”, up to 14000 tons of sunscreen enter the world’s coral reefs annually

Peggy Orenstein is a regular holidaymaker in Hawaii. For several decades she returned, year after year, to swim at the same bare-bones beach of Big Island. Her recent article in the New York Times is particularly surprising and worrying: … At first I thought it was my imagination, but this summer there was no denying it: I felt, abruptly, like I was snorkeling through an underwater desert. Most of the coral had turned white, a sign that it was in danger of dying. Entire species of fish had vanished, and those that remained — like Hawaii’s tonguetwisting state fish, the humuhumunukunukuapua’a — were sparse, barely a classroom’s worth, let alone a school… [Orenstein 2017]. 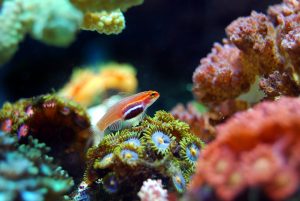 Will this ever definitely be a thing of the past? [photo source: pixabay]

We’ve been told to lavishly apply sunscreen to protect ourselves and our children against the harmful effects of the sun’s UV rays. From now on, eco-conscious beachgoers may want to go easy on sunscreens, as studies evidence that most contemporary sunscreen lotions pose a threat to ocean life [Downs et al. 2016; McCoshum et al. 2016; Corinaldesi et al. 2017; Tsui et al. 2017]. Sunscreens and other personal care products threaten the coral reefs that are most important to people: those that are focal points of tourism as well as the fringing reefs that are critical for protecting coasts from erosion. Moreover, these chemicals significantly reduce the capacity of local subsistence fisherman to access the abundance of food that healthy near-shore reefs once provided. Severe sunscreen pollution does not only affect the survival of these reefs, it also obstructs the recovery and restoration of pre-damaged reefs.

Increased scrutiny and study over the past decades has also raised concern that the products we turn to for UV protection might actually cause harm to the people who put them on their skins [Maipas & Nicolopoulou-Stamati 2015; Lim et al. 2017].

Hundreds of sunscreen products use oxybenzone or benzophenone-3 (BP-3), since this substance provides broad-spectrum ultraviolet coverage. Sunscreens washing off the swimmers ¾ Downs calls this the “swimmer pollution” ¾ threaten coral reefs all over the world, from the Gulf of Aqaba in the Red Sea to the shores of Playa Hermosa, Costa Rica. But besides washing off the swimmers’ skin, sunscreen chemicals can find their way into the sea by other means too. Many raw materials for sunscreen lotions are readily absorbed through the human skin. BP-3 can be detected in the urine within 30 minutes of application. Flushing the toilet or washing off sunscreen in the shower causes plenty of the lotion’s chemicals to enter the sewer. Towns bordering coral reefs that do not have highly efficient sewage treatment  and management systems are particularly exposed to this kind of pollution.

According to Downs et al. [2016], between 6000 and 14000 tons of sunscreen lotion, much of which contains between 1 and 10 % BP-3, annually enter the world’s reefs. So it comes as no surprise that the measured concentrations are sometimes alarmingly high. Research data obtained by Downs et al. [2016] show that early in the morning, before the swimmers even arrive, beaches in Hawaii have BP-3 levels exceeding ~700 parts per trillion ¾ this means ~0.7 mg per litre of seawater. Such high concentrations are ~10 times above the concentrations that trigger ecosystem pathologies. Additional emerging research suggests that BP-3 concentrations on near-shore reefs around the world are commonly between 100 parts per trillion and 100 parts per billion; and this is well within the range of being a significant environmental threat.

There is a great difference between much frequented and quieter beaches. Downs and his team [2016] noticed that bays popular with sunscreen-slathered tourists had dead and sterile coral, while those with very little beachgoers were healthy with lots of coral recruitment and lots of spiny sea urchins. They argue that this remarkable difference confirms that climate change, which was long thought of as the predominant causal factor, is not solely responsible for coral die-offs. Pollutants such as BP-3 (and many others) are able to create sterile, “zombie” reefs.

It was found that BP-3 induces coral bleaching. Moreover, BP-3 is genotoxic, meaning that it damages coral DNA and induces severe and lethal deformities. Even more alarming, however, is the endocrine disrupting activity of BP-3, causing the coral larvae to inappropriately encase themselves in their own “stony” skeleton at a time of their development when they should not even have a skeleton.

And BP-3 is toxic to more than just corals. It is toxic to algae, sea urchins, fish and mammals. It inhibits embryonic development in sea urchins. It can result in gender shifts in fish, whereby male fish take on female attributes, while females have reduced egg production and embryo hatchings. In mammals it has been demonstrated to be a potential mutagen and to exhibit procarcinogenic activity. Studies in both mice and rats have illustrated that exposure to BP-3 increases liver and kidney weights, reduces immunity, increases uterine weights in juveniles and reduces fertility.

Obviously, there is very little published data on the negative human health impact of sustained exposure to BP-3. It is no secret that human couples with higher BP-3 concentrations in their urine may find it harder to procreate. Men with higher BP-3 concentrations had higher levels of diseased sperm. And it can also be assumed that contaminants like BP-3 could be transferred from mothers to their offspring: both dolphin and human mothers were shown to transfer BP-3 via breast milk. The placental and lactation transfer pathways are well known sources of chemical contaminants in infants.

And benzophenone-3 is not the only culprit. This would be particularly illogical. Many other chemicals such as octinoxate, octocrylene, methoxycinnamate, camphors, non-coated nanoparticles (e.g. zinc oxide and titanium dioxide), silicone polymers, cyclic siloxanes such as octamethylcyclotetrasiloxane and decamethylcyclopentasiloxane, and several other “alphabet stews” common to chemical sunscreens have also been found to be toxic to coral reefs. Neither should it be forgotten that many thousands of chemical contaminants resulting from all kinds of anthropogenic activities end up in our watercourses and ultimately in our estuaries and oceans.

Nihil novi sub sole! There is nothing new under the sun! Our planet Earth ¾ our one and only home ¾ is suffering from a treacherous exposure to extremely complex contaminant mixtures. A most insidious aspect of this problem is ever-increasing pollution of the world’s oceans with background levels of pollutants that are becoming a major concern even in the most remote locations. Microplastics, sewage, all types of chemicals, sunscreens etc. add stress that erodes coral reef resilience.

The reefs are weakened and are unable to recover from global events, like bleaching, acidification, increased pollution, and many others.

Whatever some people may think, there is now undeniable evidence that global warming is caused by anthropogenic activities. The Anthropocene is a proposed epoch dating from the commencement of significant human impact on the Earth’s geology and ecosystems, including anthropogenic climate change [Wikipedia]. The coral reefs suffer substantial degradation as  a result of human activities, associated with overexploitation and pollution; a degradation that has dramatically accelerated over the past ~50 years. Especially global warming and ocean acidification are compounding these threats [Wilkinson 2008; Pandolfi et al. 2011].

Applying sunscreen lotions is of course only one of many anthropogenic activities that affect the future of seawater ecosystems, and more particularly the future of coral reefs. As far as coral reefs are concerned, it is carbon dioxide induced ocean acidification and its potential impact on the rate of biogenic calcium carbonate production by the dominant reef calcifiers, i.e. the corals and coralline algae, that poses the most serious threat. On the basis of mathematical models, a 40 to 83 % decline in reef calcification was predicted by 2065 [Langdon & Atkinson 2005; Pandolfi et al. 2011]. Coral reefs are also particularly sensitive to increasing temperatures because the major framework builders, i.e. the scleractinian corals, suffer a serious breakdown in their symbiosis with zooxanthellae when temperatures are abnormally high. The “coral bleaching” phenomenon (so-called because corals become white as zooxanthellae are lost) reduces the performance of the coral host, which receives most of its organic carbon from the symbiont. Mass bleaching events, when most of the coral assemblage bleaches, have become much more frequent and widespread in the past few decades [Baker et al. 2008; Pandolfi 2011].

There is no single solution to the damage sustained through sunscreen lotion pollution. A diversity of approaches could possibly be implemented. All will, however, require further investigation to determine which ingredients are safe and which pose a realistic threat to the marine ecosystem. A useful and efficient approach also requires that the data be duly communicated to consumers, manufacturers, regulators and other stakeholders. And it should be noted that none of these mitigation options requires that sunscreens be completely banned. Sun protection is of course a significant public health issue, and sunscreens play an important role in risk management.

One approach is to ban the use of products that contain threatening ingredients in areas where coral reefs are most susceptible to exposure. This type of regulatory policy has been in place for over 10 years in Mexico’s eco-reserves, including the Xcaret eco-archaeological Park and Xel-Há Park. This sort of policy might be an easy and very cost-effective approach, at least in areas crucial for active reef conservation and restoration, such as coral reef nurseries. A second approach involves a PR campaign to inform both visitors and locals about the environmental impact of sunscreen pollution and recommend they use sun-care products that contain no contaminants. A third strategy is to convince people to reduce the amount of sunscreen they use. Applying lotion to only neck, face, feet and backs of hands can reduce sunscreen loads in the water by 90 %. Also, sun clothes designed to reduce UV exposure have now become much more efficient and fashionable. And finally, a fourth option requires consumers to demand innovation from manufacturers regarding the formulation of their products. We are at a juncture in which industry can either demonstrate leadership by developing environmentally sustainable new products that are popular with consumers or dig in its heels, refusing to adapt and suffering economic and reputational consequences [Downs et al. 2016].

Whatever move is chosen, it should be remembered that the best way to keep marketing practices honest is for the consumer to demand attention to rigorous and unbiased science from industry as well as from governments. Scientific data generated by industry alone are often viewed with suspicion and distrust [Oreskes & Conway 2010]. The relevant science should preferably be conducted by financially neutral parties that follow standardized, validated testing procedures. And governments must play a pivotal role by encouraging third-party testing, standardizing methodologies and moderating dialogue among all interested parties.

Funny how things turn out! Some manufacturers have started to produce sunscreens marketed as “reef friendly”. As for “healthy” and “natural” food labels, the rules that guarantee these designations however are vague or inexistent. Even so, a “reef friendly” lotion sounds like a good idea.

But what role have governments played in all this? It seems as though certification has developed as a private-sector, market-based tool, with little regulatory control by public authorities ¾ which does not mean that decision makers should introduce excessive bureaucracy, seek more control over the behaviour of academics and try to “measure” their scientific output.

Langdon & Atkinson [2005]. Effect of elevated pCO2 on photosynthesis and calcification of corals and interactions with seasonal change in temperature/irradiance and nutrient enrichment, Journal of Geophysical Research 110, pp. 16

Orenstein [2017]. Is Your Sunscreen Poisoning the Ocean?, The New york Times, August 17