Shale gas: not what you would call a panacea!

Flanders’ Minister-President Jan Jambon presented this singular trophy – which has never been awarded before – to CEO of Project One at INEOS John McNally. “Last year, INEOS announced the construction of a new production site at the Port of Antwerp: an investment of around 3 billion euros,” stated the Minister-President. “There is no doubt that this is an exceptional investment. Not only is this amount the biggest investment ever made by INEOS, it also is the largest investment made in the entire European chemical industry in 20 years, boosting the sector’s resilience in the process” (https://www.flandersinvestmentandtrade.com/en/news/flanders-honors-4-international-companies-after-record-year-and-decade-foreign-investments).

In 2019, INEOS was the fifth petrochemical company in the world [Tullo 2019]. Its British Chairman and CEO, Jim Ratcliffe, was bent on importing ethane from American shale using gigantic ships, and committed to producing ethylene and plastic in Europe. And he succeeded! On 23 March, 2016, the company celebrated the arrival of the Intrepid in the Norwegian port of Rafnes, thereby heralding the start of a new era for the European chemical industry. 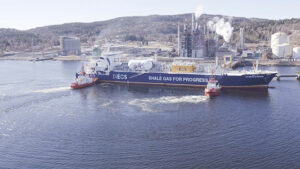 INEOS’ Project One seems to be exceptionally innovative and ambitious. In 2016, the group published the banns of its new marriage with Flanders: after  twenty years of presence in the Antwerp port area with six factories, INEOS announced its plan to invest another 3 billion euros to build a huge complex composed of two production units, one for ethylene production, the other for propylene. Both will use American shale gas as their raw material. Project One was presented as an essential move to enhance the competitiveness of the European chemicals industry. It will only produce ethylene and propylene, destined for other factories. Well aware of the fact that ethylene and propylene gases are almost exclusively used for the production of their respective polymers, polyethylene and polypropylene, it goes without saying that Project One will widely contribute to the production of virgin, non-biodegradable plastic [Moisan 2021].

Is shale gas the conditio sine qua non for progress?

Shale gas is a form of natural gas that predominantly contains methane. It is found underground in shale rock. Shale gas is classified as “unconventional” because it is found in shale, a less permeable rock formation than sandstone, siltstone or limestone in which “conventional” gas is found. It is generally distributed over a much larger area and does not flow easily.

In 2015, the total amount of technically recoverable reserves of shale gas was estimated at ~215 trillion cubic metres, across 46 countries. The largest estimated resources are in China, followed by Argentina, Algeria, the United States and Canada. In Europe, Poland and France have the greatest stocks (https://www.eia.gov/energyexplained/natural-gas/where-our-natural-gas-comes-from.php). Shale gas is expected to account for ~30 % of the world’s natural gas production by 2040. Plastic manufacturers were quick to “smell” the exceptional opportunity represented by ethane-rich shale gas. The idea is to make the 5 to 10 % of ethane more profitable to produce polymers, since the added value is far greater than that of automotive fuel.

Hydraulic fracturing – this method is commonly known as fracking – is the process used to extract the shale gas. Deep holes are drilled down into the shale rock, followed by horizontal drilling to access more of the gas reserves, as shale reserves are typically distributed horizontally rather than vertically. Fracking fluids containing sand, water and chemicals are then pumped at high pressure into the drilled holes, to open up fractures in the rock, enabling the trapped gas to flow through the fractures into collection wells. From there it is piped away for commercial use. Recovery rates for shale gas are much lower than for conventional gas.

This highly polluting method causes significant methane leaks. Howart, an ecologist at Cornell University, concluded that the sudden surge of methane observed since 2008 was not attributable to cow farms, as was previously thought, but to the extraction/production of shale gas in Canada and the United States [Howarth 2019]. Moreover, the review by Guo & Wang [2021] evidences that besides methane emissions there are issues related to water resources that constitute important additional environmental risks.

Is it a good idea to produce virgin plastic when the planet faces a huge plastic contamination?

From the onset, environmental organisations have seen Project One as a serious challenge. They mainly accused INEOS of having minimised the environmental impact by cutting the file into three separate assessments: one for the deforestation of the area, and one for each of the plants. Trying to keep the full sum of greenhouse gas emissions, pollution, biodiversity loss and climate impact remains out of the picture until it is too late to put forward alternatives, as Hens [2019] puts it. The approach is cunning and not unusual, but it is also reprehensible and contrary to European regulations. Faced with the prospect of lawsuits, the company finally agreed to submit one single impact study instead of three.

It is hard to believe that the Flemish authorities allowed deforestation without waiting for the comprehensive impact assessment that the legal authorities had demanded: another 55 hectares of forest in the port of Antwerp to grub up. More than three thousand people signed a notice of objection, and some thirty national and international organisations also objected: Politicians and policymakers need to free themselves from the harmful stranglehold of polluting multinationals such as INEOS and their influence on future Flemish environmental and climate policy by putting shareholder interests first [https://www.11m.be/petitions/no-permit-for-ineos-project-one]. Finally, the chainsaws were stored away at the request of the justice department, and INEOS has since launched a procedure on matters of substance, thereby delaying the project by at least a year. The first instance decision is not expected before 2022.

Another question is whether the project will succeed

On 15 January, 2021, INEOS announced that it was rescheduling sine die the construction of its polypropylene production unit [https://project-one.ineos.com/en/news/ineos-rephases-project-one/]. When questioned, the group ensured that this decision was unrelated to the challenges, but wanted to give priority to the ethane cracker. There is a growing and acute need for ethylene on the market, while propylene is more readily available. The investment will however not be halved. The ethylene production unit and its supporting infrastructure alone already represent more than 3 billion euros ─ an additional cost that could well have influenced the outcome [Moisan 2021].

According to Truyts [2021], the British group will have to find an additional 2 billion euros to borrow if it really wants to build the propylene unit as planned; a new challenge which, in the opinion of opponents of the project, could well once and for all signal the cancellation of this part of the project.

And anyway, the ethylene unit on which INEOS relies has still not even been authorised [Moisan 2021].

Why we have to be very careful

During production, storage and transport of shale gas, huge amounts of methane are emitted. This is very damaging for the environment, since methane is a much more powerful greenhouse gas than carbon dioxide. Its effect on the climate is 28 times more severe. Both the UN and the EU want to immediately phase out methane, whether from shale or fossil gas. It would appear that the INEOS licence application does not take this into account. On the contrary, by not doing so it fits seamlessly into the strategy of Big Oil & Gas to continue to introduce cheap shale gas produced outside the EU at the taxpayer’s expense.

Blue hydrogen is derived from natural gas through the process of steam methane reforming, which mixes natural gas with very hot steam, in the presence of a catalyst, thereby generating hydrogen and carbon monoxide. Additional water is added to the mixture, which converts the carbon monoxide into carbon dioxide and creates more hydrogen. The carbon dioxide emissions produced are then captured and stored underground. This  sounds very promising, but a very recent study has put a damper on any enthusiasm that may arise. Based on their life cycle analysis, Howarth & Jacobson [2021] conclude that blue hydrogen has many unwanted climatic consequences. According to the authors there is no way blue hydrogen can be considered green.

And when the production of polyethylene is increased − it may be assumed that this is the intention of INEOS − I can only hope this will not result in even more plastic waste being dumped on the planet Earth.

I remember the pictures of Henderson Island, the uninhabited island in the South Pacific Ocean. That little piece of heaven is already hopelessly polluted by some 38 million pieces of plastic [Davis 2019]. The ubiquitous chemical waste has still not been cleared up. Also, our efforts to reuse or recycle end- of-life plastic have so far not been sufficiently successful to avoid new waste production.

Ramping up plastic production without taking into account environmental consequences is most certainly not a good idea.