Scientists have tried to do things the nice way but you, my dear policymakers, are still not prepared to take the message on board

In 2018, total greenhouse gas emissions in Belgium amounted to 118.3 megatons of CO2 equivalents, a slight increase of 0.28 per cent compared to 2017

I can only assume that you did not read this alarming message that was published in several Belgian newspapers. And yet, a substantial decrease in greenhouse gas emissions is needed to live up to our ambitious pledge. It required a great deal of effort to achieve small progress before 2018, but now it appears that the figures are beginning to rise again. Increases could be due to a number of nuclear power plants that were shut down in 2018 [https://www.klimaat.be/nl-be/]. Whatever the reasons may be, Belgium is simply not on track to meet European climate ambitions. It seems that Belgian governments – Belgium has six parliaments and six governments – lack the will and the way. 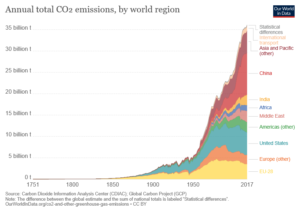 Globally, the primary sources of greenhouse gas emissions are electricity and heat, agriculture, transportation, forestry and manufacturing [Rockström et al. 2020]. The global food system is a predominant greenhouse gas emitting sector in the world [IPCC 2019a&b] and by far the largest cause of biodiversity loss, terrestrial ecosystem destruction [IPBES 2019], freshwater consumption, and waterway pollution because of the huge overuse of synthetic fertilizers and pesticides [Rockström & Karlberg 2010]. The food system holds the stability of humanity in its grips. Can the predicted rise in global food demand by 2050 be met sustainably? The answer must be yes, but growth and sustainability do not come automatically. Fisher [2018] recommends a combination of interventions to tackle the associated environmental challenges.

The global food system is obviously letting us down! The system is not only responsible for polluting the natural environment, but falls short of providing us with healthy and diversified food. To make matters worse, escalating obesity, diabetes, learning disorders, autism, infertility, and food allergies result from endocrine disrupting chemicals in our food, but also in our homes and personal care products [Trasande 2019].

An urgent shift in mindset is therefore required to recognize that agricultural ecosystems are huge biomes of the Earth that have an enormous impact on the planet’s elemental cycles. Contemporary agriculture was able to develop through the benign climatic conditions and abundant biodiversity of the Holocene. During the current Anthropocene [Crutzen & Stoermer 2000; Crutzen 2002], however, the food system became a predominant driver of our contemporary Earth trajectory that could trigger a cascade of interacting non-linear processes propelling the planet towards a radically different climatic state [Svingen & Vinggaard 2016; Rockström et al. 2020]. There is little doubt that this will impact the future of humanity!

What is likely to happen

It is now clearly evidenced that warming beyond 1.5 C would put us in the danger zone [IPCC 2019a]. The world has already warmed by 1 C above pre-industrial levels; at 1.5 C tropical coral reefs are very likely to collapse. At 2 C, the Arctic summer sea ice would disappear and the Greenland Ice Sheet could disintegrate; several glaciers of the West Antarctic Ice Sheet might already have passed tipping points, contributing to over two metres of unstoppable sea-level rise in the long-term [IPCC 2019b]. The oceans have buffered the effects of global warming by absorbing more than 90 % of human-caused excess heat. However, social and environmental costs are mounting and, as oceans grow warmer, more acidic and less productive, coastal extreme events and sea-levels are on the rise [IPCC 2019b]. The powerful Storm Gloria, which battered much of eastern Spain and southern France, is seen as a harbinger of more hardship and calamity. And Ciara, the storm that recently assailed the British Islands and the Benelux came as yet another reminder of the impending disaster.

The diversity of species and ecosystems is now declining faster than at any time in human history [IPBES 2019]. Moreover, there is convincing evidence that tipping elements are connected and can trigger cascading effects. Steffen et al. [2018] explore the risk that self-reinforcing feedbacks could push the Earth System toward a planetary threshold that, if crossed, could prevent stabilization of the climate at intermediate temperature rises and cause continued warming on a “Hothouse Earth” pathway even as human emissions are reduced. Crossing the threshold would lead to a much higher global average temperature than at any interglacial age in the past 1.2 million years and to sea levels significantly higher than at any time in the Holocene. For example, Arctic sea-ice melt amplifies regional warming, accelerating Greenland ice sheet melt, which in turn may have contributed to the recent 15 % slowdown in the Atlantic Meridional Overturning Circulation [Caesar et al. 2018]. This circulation is connected to both regional rainfall dynamics in the Amazon and the West African monsoon [Parsons et al. 2014]. A further slowdown potentially triggers drought, amplifies global warming and generates food shortages. Without a major transformation across sectors and scales, we risk crossing points of irreversibility that will threaten the Earth system as we know it.

These are the words of Yuval Noah Harari [https://www.ynharari.com/], who was recently awarded an honorary doctorate by my university, the Vrije Universiteit Brussel. In her speech, Rector Caroline Pauwels praised the renowned author of Sapiens, Homo Deus and 21 Lessons for the 21st Century, as a historian who looks beyond borders and not only reports history, but builds on it: In Harari we have an outstanding guide to show us the possibilities and dangers of future developments.

The ceremony was attended by a large audience, which of course can only be seen as a good thing. But attending official events is obviously not enough. Much better to read and reflect on what thinkers of the calibre of Harari have written and to spread their message.

The emergence of essentially global problems, such as the melting of the polar caps, nibbles on the last leftovers of the independent states. No sovereign state will ever be able to combat global warming on its own [Harari 2016].

To encourage recycled office furniture for the Flemish administration is just about as useful as a plaster cast on a wooden leg! Any action plan should include a programme of consultation and cooperation across a whole range of areas, and procrastination must be avoided at all cost.

It is high time we stopped playing games!

IPCC [2019b]. Special Report on the Ocean and Cryosphere in a Changing Climate, available on https://www.ipcc.ch/srocc/

Rockström & Karlberg [2010]. The Quadruple Squeeze: Defining the safe operating space for freshwater use to achieve a triply green revolution in the Anthropocene, Ambio 39, 3, 257 – 265

Svingen & Vinggaard [2016]. The risk of chemical cocktail effects and how to deal with the issue, Journal of Epidemiology and Community Health 70, 322 – 323