In 2014 Jonathan O’Callaghan commented on the Queensland University of Technology project that aims to improve the quality of bananas: … The world’s first human trial of “super bananas” will start soon in the hope of a more nutritious source of food to Ugandans and East Africans. The bananas will be enriched in pro-vitamin A, which the human body can break down into “regular” vitamin A, to tackle the consequences of vitamin A deficiency in the regions. And, if the trial is successful, it’s hoped farmers could begin growing the enhanced food by 2020…

Paul et al. [2017] published the “proof-of-concept” technology required for the development and generation of pro-vitamin A fortified East African highland banana varieties in Uganda. The Cavendish dessert banana was genetically modified, and significantly enhanced pro-vitamin A levels were demonstrated in the fruits of plants grown in the field in Australia. This research project was supported by the Bill & Melinda Gates Foundation and by the UK Department for International Development.

Last year, Amy Maxmen [2017] published the Nature News article “Genetically modified apple reaches US stores, but will consumers bite?”: … the “Arctic apple” is one of the first foods to be given a trait intended to please consumers rather than farmers, and it joins a small number of genetically modified organisms to be sold as a whole product, not an ingredient. Since Okanagan Specialty Fruits in Summerland, Canada, planted its first test apples in 2003, the array of foods modified in labs has expanded to include meatless burgers, made with soya protein produced by recombinant yeast, fish fillets grown from seafood stem cells, and mushrooms whose genomes have been edited with CRISPR technology. Most of these items have not yet reached the market though… 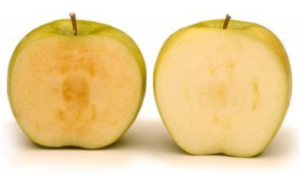 The apples don’t turn brown because the researchers have figured out how to silence the genes that produce the browning enzyme. Growers and opponents of genetically modified organisms (GMOs) have raised concerns about genetically engineered crops and the complicated technology behind it. Health Canada however has approved the sale of genetically modified apples, and so has the US Department of Agriculture. Many are now keenly watching the Arctic apple’s launch for clues as to how consumers will perceive the “new” fruit.

When the cells of conventional apples are damaged, which happens when they are cut, bitten into or bruised, an enzyme called polyphenol oxidase (PPO) initiates a chemical reaction that turns the flesh of the fruit brown. Due to varying levels of PPO, some apple varieties brown fast, while others have a lower degree of browning. The Arctic Apple is the world’s first non-browning apple. Its flesh will retain its fresh, appealing colour even days after being sliced, which the producer claims will increase apple consumption and decrease food waste.

I can just imagine the publicity: “Crisp, wholesome, great-tasting apple slices are perfect for fresh and healthy snacks. And no time wasted”!

Recent developments of cost-effective, high-throughput sequencing technologies have resulted in significant increases in available genomic information for fruit crop species. These developments redefined the boundaries of genetic engineering and genetically modified (GM) crop plants. Since fruit (and vegetable) crops play a key role in the economy of both developed and developing countries, plenty of efforts have been made to improve crop quality. Both conventional breeding and genetic engineering techniques were used to introduce desirable genes in fruit crops. However, societal misstrust for the latter technologies, coupled with misleading and false information regarding their safety, makes it difficult and even impossible to successfully commercialise GMOs [Pussemier & Goeyens 2017].

Some twenty years ago, Hawaiian papaya farmers were in big trouble. Ringspot virus, transmitted by insects, was destroying their crops. Farmers tried everything to eradicate the virus: selective breeding, crop rotation, quarantine. Nothing worked. One scientist however had a different idea: what if a gene, known as the coat protein, could be transferred from a harmless part of the virus to the papaya’s DNA? Would the GM papaya then be immune to the virus? And so it was! A fierce battle broke out between GMO supporters and opponents, but in the end the GMO supporters won and the papaya survived. Papayas that are resistant to ringspot virus have now been cultivated in the US for more than a decade [Kanchiswamy et al. 2015; Saletan 2015].

On the whole, there seems to be more scope for marketing new GM varieties, developed with novel technologies, that enhance the consumer experience (fruit crops, for example, with increased levels of antioxidants, more flavour or sweetness) in addition to other improvements such as pest and disease resistance. Moreover, when biotechnology is used to target the luxury product market, it easily gains consumer acceptance. Examples include the blue pigmented roses developed jointly in Japan and Australia, using a transgene for the expression of the blue pigment delphinidin [Katsumoto et al. 2007]. Not an unimportant chemical, since it is common knowledge that delphinidin also possesses strong antioxidant and anti-inflammatory properties.

The market can certainly be expected to offer a larger choice of products in the future, including GM food products which, in addition to environmental and societal benefits, will provide novelty and enhanced quality, thereby enriching the quality of the consumer experience.

Today, most transgenic fruit crop plants have been developed using Agrobacterium-mediated transformation. Among those that have been developed, only papaya has so far been commercialised. Following the regulatory and social hurdles associated with transgenic crops, novel biotechnological tools have emerged. They allow for the insertion of specific genes that make it possible for genes to be modified or replaced at their genomic location without involving any other source of DNA [Liu et al. 2013; Araki et al. 2014]. The absence of foreign DNA and the introduction of genes derived from the same plant species should help enhance consumer acceptance of novel GM plant products (food products) that were developed using those technologies [Kanchiswamy et al. 2015].

With the development and improvement of those technologies, the time is right to revisit the benefits of genetic modification and initiate the development of novel, consumer acceptable products. Recently designed tools will enable modifications or mutations of genes of interest without involving foreign DNA. As a result, plants developed using this technology could be considered as non-transgenic genetically altered plants. According to Kanchiswamy et al. [2015] this would open the door for the development of fruit crops with superior phenotypes and allow them to be commercialised even though GM crops are currently poorly accepted, with the exception of a few products such as the super bananas that produce more vitamin A, and the non-browning apples that do not turn brown after being cut and retain their original and natural flavour and taste for long periods of time.

There is a great deal genetic engineering can do for public health and for the quality of our planet. We cannot afford to engage in a wasteful fight over GMOs, in a sterile fight “for life and death” between an army of quacks and pseudo-environmentalists waging a war on science and a gang of corporate cowards who would rather stick to profitable weed-killing [Saletan 2015].

Paul et al. [2017]. Golden bananas in the field: elevated fruit pro-vitamin A from the expression of a single banana transgene, Plant Biotechnology Journal 15, 520 – 532

Saletan [2015]. Unhealthy Fixation – The war against genetically modified organisms is full of fearmongering, errors, and fraud. Labeling them will not make you safer, Slate,  July 15