Here is something to think about. Several studies have shown that current trends in yield improvement will not be sufficient to meet the global food demand by 2050. They suggest that a further expansion of agricultural area will be required. Agriculture however is a main driver of biodiversity losses and a major contributor to climate change and environmental pollution. Hence, food will have to be produced sustainably in ways that address environmental challenges and contribute to significant reductions of both climate change and environmental pollution [Tilman et al. 2011; Bajželj et al. 2014; Pussemier & Goeyens 2017]. Future food production will be sustainable or will simply not be.

It should also be remembered that human health is influenced more by food than by any other single factor. Facilitating healthy diets is critical for individual well-being and will limit the costs for the treatment of illnesses [GBD 2017 Causes of Death Collaborators 2018].

World leaders at the 2012 Conference on Sustainable Development (Rio+20) reaffirmed everyone’s right to have access to safe and nutritious food, consistent with the right to adequate food and with the fundamental right of everyone to be free from hunger. The UN Secretary-General’s Zero Hunger Challenge launched at Rio+20 called on governments, civil society, faith communities, the private sector, and research institutions to unite to end hunger and to eliminate the worst forms of malnutrition [https://sustainabledevelopment.un.org/topics/foodagriculture]. Today, it is generally acknowledged that malnutrition in all its forms, including obesity, under-nutrition and several other dietary risks, is the leading cause of poor health. Three pandemics – obesity, under-nutrition, and climate change – constitute a syndemic, or synergy of epidemics, because they co-occur in time and place, interact with each other to produce complex and severe sequelae, and share common underlying societal drivers [Swinburn et al. 2019].

The current trajectory of the food system will therefore have to adopt new and better technologies; more transformative technical and policy options will be needed [Springmann et al. 2016 & 2018; Wollenberg et al. 2016]. The food sector has been relatively slow at capitalizing on recent technological advances [World Economic Forum 2018] and how this sector will develop is not quite clear. But there is a possibility of genuine disruption in the near future. Alternative proteins and meat substitutes attract considerable financial investment, research attention and interest in the media as a pathway to meeting nutritional needs as well as the food demands of a predicted population of ~10 billion people by 2050 [World Economic Forum 2019a].

Meat has a special place in human diets. Modern human beings have an innate preference for meat as it is both energy dense and protein rich. However, it would not be possible for a global population of ~10 billion people to continue to eat the amount of meat typical of North American and European diets and keep within the agreed sustainable development goals for the environment and climate. Livestock production can have major negative effects on the environment [Tilman et al. 2011; Pussemier & Goeyens 2017]. Moreover, the consumption of red meat and processed meat in particular has substantial effects on people’s health [Carr et al. 2018; Alshahrani et al. 2019; Cui et al. 2019]. It is obvious that meat production and consumption pose a special challenge to the future development of the global food system [Godfray et al. 2018].

On the other hand, rearing, distributing and selling animal-sourced food is responsible for the livelihood of millions of people. It has been estimated that ~3 % of gross global productivity is from agriculture, of which 40 % is from livestock. It provides livelihoods for ~1 billion people, predominantly living in low-income countries. Moreover, meat consumption is soaring across the world with no sign of a plateau in sight and with Asia rapidly converging on “Western” consumption levels [World Economic Forum 2019b]. This trend is incompatible with ensuring that global temperatures do not rise by more than 2 degrees Celsius (let alone 1.5 degree). This way, we will never meet the sustainable development goals!

Alternative proteins, improvements to current production systems, and consumer behaviour change are excellent pathways to meet our needs. In recent years, there has been a burst of innovation involving new purely plant-based alternatives, products based on insects and other novel protein sources such as microorganisms, and the application of cutting-edge biotechnology to develop laboratory cultured meat.

Protein-rich plants used in unprocessed forms (e.g. lentils), edible microbial biomass, processed products such as soy-based tofu and wheat-based seiten, or the recent innovations seeking to make vegetable burgers and other products that are almost indistinguishable from real meat all illustrate the newest developments. To date, commercially successful novel products are based on protein derived from microorganisms [Moura et al. 2018; Linder 2019]. Microorganisms such as bacteria, yeasts and filamentous fungi have several beneficial properties, including their rapid growth rate and their ability to assimilate simple organic substrates such as hydrocarbons, alcohols or organic acids. Microbial biomass has high protein content and often contains beneficial lipids and vitamins. An additional advantage is that industrial-scale production of edible microorganisms does not require arable land and consequently, these types of facilities can be located on marginal lands or even more extreme environments such as arid regions.

Insects have also received considerable attention, in particular because they can be reared on feed that is unsuitable for livestock and which would otherwise be wasted or have low economic value [van Huis 2013]. Innovation in this area also includes the discovery and investigation of new insect species for food production and developments in how they may be produced economically at scale. They can be consumed in their natural state. Moreover, to increase acceptability in cultures where insect consumption is not traditional, there is also research into the development of novel products that contain insects in a different form, for instance as flour.

Producing meat in the laboratory without the involvement of living animals is a huge technical achievement made possible by the Fourth Industrial Revolution [Kadim et al. 2015]. Only recently have technologies advanced enough to make this happen, with forms of meat that might be used in products which traditionally contain minced meat. It is therefore conceivable that “laboratory burgers” will be available to the consumer within the next few years. Through more fundamental research that is required in stem cell technology and muscle development and in its medical applications in fields such as wound healing, there is a real prospect of rapid advances in the consumable meat sector in the next decade [Post 2014]. In addition to producing products that resemble meat, some “food futurologists” also envisage new products outside our current sensory experience that will create new food cultures. 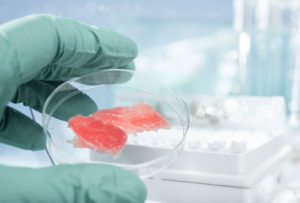 Is Lab-Grown Meat the Future of Sustainable Food, or Just Plain Gross? [ http://www.eatingwell.com/article/291089/is-lab-grown-meat-the-future-of-sustainable-food-or-just-plain-gross/ ]

The headline “Scientists are growing meat on blades of grass” caught my eye. What if you could grow a burger in the same way as you grow grass? Charlton [2019] reports that scientists at the university of Bath are taking cells from pigs and cows and growing them on blades of grass, joining a host of other researchers and companies who are now working on meat production in the laboratory. The cells are harvested by biopsy and fed a solution of glucose, amino acids, vitamins and minerals, which helps them develop into mature muscle cells.

No doubt, alternative ways of making protein are rising in popularity as the earth’s population grows and people in developing countries are beginning to consume more meat. The World Economic Forum [2019a] report highlights the positives of meat alternatives, including boosting food security and animal welfare, reducing the risk of food poisoning and cutting down the environmental impact of producing protein. The report also acknowledges there are still some technical, socio-political and regulatory challenges to overcome before widespread adoption of the new technology.

Our relationship with meat and livestock farming is complex and achieving widespread adoption will probably take time. People may regard alternatives as “unnatural” and therefore unappealing, and they may distrust the modern commercial food system and the way in which food is processed. Novel products may be rejected on principle or because of a “yuck factor” [World Economic Forum 2019a]. For the foreseeable future, the meat and alternative protein industries will coexist and be given an opportunity to complement one other.

Meat without bones: I will be interested to see how consumers experience the introduction of laboratory meat. And I am eager to know when it will be available and curious to know what it will taste like.

Carr et al. [2018]. Association Between Intake of Red and Processed Meat and Survival in Patients With Colorectal Cancer in a Pooled Analysis, Clinical Gastroenterology and Hepatology, in press

Cui et al. [2019]. Association between intake of red and processed meat and the risk of heart failure: a meta-analysis, BMC Public Health 19, 1, 354

Springmann et al. [2016]. Analysis and valuation of the health and climate change cobenefits of dietary change, Proceedings of the National Academy of Sciences 113, 15, 4146 – 4151

World Economic Forum [2019b]. Meat: the Future series – Options for the Livestock Sector in Developing and Emerging Economies to 2030 and Beyond, pp. 28