Can we finally replace conventional pesticides with harmless ones?

The use of conventional pesticides is the subject of fierce debate because of their potential negative impacts on the quality of the ecosystem as well as on our physical and mental health [Ali et al. 2021; Swan 2021]. Curbing the excessive use of these chemicals is becoming a matter of urgency.

Apple Malus domestica Borkh is the most cultivated fruit crop worldwide. As is the case with any other plant, apple trees are subject to abiotic and biotic stresses that cause important economic losses. Apple trees suffer from fungal, viral and bacterial diseases, insects, mites, and nematodes. The rosy apple aphid, Dysaphis plantaginea, and the apple worm, Cydia pomonella, are amongst the most harmful apple pests. Aphids alter fruiting and shoot development, and they can spread viruses. Moreover, decades of intensive insecticide use have given rise to aphid resistance, which means that we have to rely on research to develop harmless alternatives to synthetic pest management chemicals [Rousselin et al. 2017]. Other major diseases are apple scab, powdery mildew, and fire blight caused respectively by the fungi Venturia inequalis and Podosphaera leucotricha and by the bacteria Erwinia amylovora [Jamar et al. 2010]. 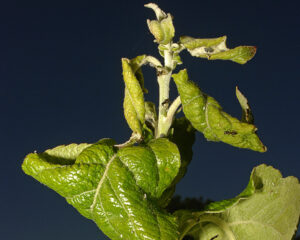 With high percentages of food deterioration caused by insect infestation, serious food losses can occur either in terms of food damage or in terms of financial losses sustained by the supplier through declines in customer satisfaction. Maggoty fruit is not what we like, but then of course, neither do we want synthetic pesticides to harm our health.

We cannot remain indifferent and inactive in the face of this dilemma.

Synthetic insecticides are toxic to a wide range of non-target organisms; they cause disturbances in ecosystem functioning and tend to accumulate in food, water and soil with all the inevitable consequences. To remedy these consequences, essential oils (EOs) are now being promoted as potential alternatives to the predominantly synthetic insecticidal agents.

EOs are very complex mixtures of volatile organic compounds produced as secondary metabolites in plants. They consist of many different hydrocarbons (e.g., terpenes and sesquiterpenes) and oxygenated compounds (e.g., alcohols, esters, ethers, aldehydes, ketones, lactones, phenols, and phenol esters). Moreover, they are released when the plants suffer aggressions. It is quite easy to extract them from various plant parts that are rich in oil glands, including leaves, flowers, stems and/or roots [Marsin et al. 2020].

Natural insect repellents such as EOs are environmentally friendly, biodegradable, and do not intrude soil and water. They act as the predominant endogenous sources of plant protection against pests and show low or no toxicity towards vertebrates. Moreover, it is important to remember that EOs are safe for use in food applications. As long as 10 years ago, Montero-Prado et al. [2011] published a fascinating paper about the application of cinnamon EO in packaging materials to significantly extend the shelf life of the succulent yellow Calanda peach.

Cinnamon is obtained from the bark and twigs of several trees of the Cinnamomum genus and Lauracea family. It is used in sweet and savoury foods. Moreover, it is a substance with powerful medicinal properties: it is loaded with antioxidants, has anti-inflammatory properties, may reduce the risk of heart disease, lowers blood sugar levels, has a powerful anti-diabetic effect, and helps fight bacterial and fungal infections [Goeyens 2019].

Now a striking new application has been added: plant protection, and more specifically the protection of apple trees. Anyone who enjoys his apple a day should read carefully.

An investigation jointly carried out by the Gembloux Agro-Bio Tech faculty of ULiège and the Université Catholique de Louvain, has shown that Mentha spicata and Cinnamomum cassia nano emulsions transit throug the apple tree’s vascular system and into the leaves [Werrie et al. 2021].

Carvone, a major constituent of the M. spicata EO, was contained in the leaves and emitted at a constant rate. Its particular odour repels several aphid species. Trans-cinnamaldehyde, Cinnamomum cassia’s major component, accumulated in the leaves without being emitted. The Cinnamomum cassia EO with its most important constituent compound, trans-cinnamaldehyde, also demonstrated insecticidal activity.

Natural origin alternatives are safer for the environment and the consumer

Plants produce numerous secondary metabolites that are not directly involved in their growth and development, but allow them to adapt to their environment and defend themselves against pathogen and pest attacks. Among these secondary plant metabolites, EOs are concentrated mixtures that exhibit numerous biocidal activities such as insecticide or fungicide. They have a very complex composition, much more complex than a synthetic pesticide with only one or a few active substances. These mixtures are multi-target products that are significantly less subject to the development of resistance, as was already observed for conventional pesticides.

Plants or insects end up adapting to pesticides and detoxifying the active molecule(s). The use of EOs makes it possible to reintroduce complex mixtures and complicate any adaptation or resistance. If an insect or a plant has to detoxify ~150 different substances, then it makes sense that resistance build-up will be slower compared to detoxifying one single substance. There is also the cocktail effect, meaning that a mixture of molecules at a lower dosage has a similar biological effect to that of an individual compound at a higher dosage.

Biopesticides for the future

The advantage of the injection method is to reduce the amount of inputs compared to pesticide spraying. During a conventional phytosanitary treatment by spraying, a significant part of the active ingredient will not reach its target and will end up in soil and water, potentially causing pollution. The injection requires much smaller amounts.

The study by Werrie et al. [2021] aimed to demonstrate that the EO substances were transported by the sap to the leaves and that the leaves did indeed emit these compounds into the surrounding air. They did not remain at the injection site. If the natural substances travel to the leaves, they will be able to exert their biocidal activity there. Quite unexpectedly, this study also demonstrated that not only did the essential oil migrate to the leaves, but that its injection also seemed to stimulate the natural defences of the plant.

Could this be a major step towards the development of tomorrow’s biopesticides?

Goeyens [2019]. Cinnamon, one of the most delicious and healthiest spices on the planet, in Good and Bad Food Science – Separating the wheat from the chaff, Academic and Scientific Publishers, 117 – 130