Grubs can be eaten raw and when they are cooked they taste like roasted almonds — or so we are told !

… This information will come in handy for those of us following the latest recommendation from the United Nations: Consume more insects … In fact, some two billion people eat a wide variety of insects regularly, both cooked and raw; only in Western countries does the practice retain an “ick” factor among the masses [Holland 2013]…

On the one hand, insects can be slimy, cringe-inducing creatures, very often swatted away by humans or ruthlessly eliminated with insecticides. On the other hand, van Huis et al. [2013] are convinced that beetles, wasps, caterpillars and many more are unexplored nutrition sources that can help reduce global food insecurity.

Human beings often consider insects as a nuisance; no more than pests that intent on destroying crops and tormenting humans and other animals. Nothing, however, could be further away from the truth. Insects can provide food at low environmental cost, and contribute positively to livelihoods. They play a fundamental role in nature. Yet, many westerners continue to ignore these benefits. Contrary to popular belief, insects are not merely “famine foods” eaten in times of food scarcity. Many people around the world actually choose to eat insects, mainly because of the palatability of insects and their established place in local food cultures. Though insects do not belong to the Western gastronomic tradition, they currently supplement the diets of some 2 billion people and have always been part of the human diet in Asia, Africa and Latin America. Of the ~1 million known insect species, roughly 1900 are consumed by humans. Most consumed insects include beetles, caterpillars, bees, wasps, ants, grasshoppers, locusts and crickets [Holland 2013].

As man evolved, the hunter-gatherers collected much more than edible plants. These early people probably hunted for insects too. Insects could be found everywhere and many animals ate them. So why shouldn’t humans eat them? Early humans took their cue from insectivorous animals to decide which insects were edible and tasty.

Grotesque and frightening in appearance, cicadas do not bite and are actually harmless to handle
[photo source: pixabay]

Years later, Romans and Greeks would dine on beetle larvae and locusts. The Greek scientist and philosopher Aristotle even wrote about harvesting tasty cicadas. In the Old Testament book of Leviticus (11, 20 – 23), the authors stated: … All ﬂying insects that walk on all fours are to be regarded as unclean by you. There are, however, some ﬂying insects that walk on all fours that you may eat: those that have jointed legs for hopping on the ground. Of these you may eat any kind of locust, katydid, cricket, or grasshopper. But all other ﬂying insects that have four legs you are to regard as unclean... This “green light” was obviously bad news for locusts and grasshoppers. John the Baptist lived in the desert for months on a diet of locusts and honeycomb !

Locusts were also a nutritious, cheap and plentiful source of food for the ancient Algerians. They prepared the insects by boiling them in salt water and drying them in the sun. And the Australian Aborigines made meals of moths. After cooking them in sand, they burned off the wings and legs and sifted the moths through a net to remove their heads, leaving nothing but delectable moth meat. The Aborigines were and continue to be entomophagists.

Several varieties of ants are also consumed as food in countries like China, Thailand, India and some African countries [van Huis 2013]. Moreover, the Chinese black ant (Polyrhachis dives) has been a traditional edible insect in China for centuries and in addition to its nutritional value the insect has been used in traditional medicine for the treatment of rheumatoid and osteoarthritis, inflammatory diseases, and diabetes [Huang & Xiao 2003].

It is difﬁcult to generalize for all insect species consumed worldwide, but compared to beef, pork and chicken, the insect protein content is, on average, similar. Scientists, decision makers, and business managers are increasingly aware of the importance of new protein sources, which is why it was recommended to consume insects since they are environmentally sustainable and nutritious alternatives to conventional livestock products [Payne et al. 2016]. 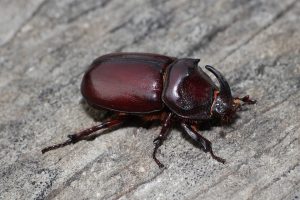 Moreover, compared to other livestock animals, insects seem to contain more polyunsaturated fatty acids1 and higher levels of minerals, such as iron and zinc, and more vitamins B1, B2, and B3 [van Huis et al. 2013]. Asiatic rhinoceros beetles (Oryctes rhinoceros L.) and winged termites (Macrotermes nigeriensis S.) are real live, crawling and flying stocks of nutrients and minerals [Omosoto et al. 2015]. Both insects are rich sources of proteins, minerals, fibre and fat. Their levels of antinutrient and/or secondary metabolites are lower, when compared to other food sources. Also, these two insects are rich in antioxidants. They can be used to substitute animal proteins like beef and mutton, and inclusion of these insects in the human diet tends to enrich the body with mineral salts.

Another striking example is that of the people of many ethnic origins living in Manipur — a state in north-eastern India, with the city of Imphal as its capital [Wikipedia] — who capture and consume many insect species living in puddles, ponds, lakes, and rivers. In the valley region of the Manipur state, there are many inland freshwater lakes that act as ideal habitats for aquatic edible insects. They are highly valued and sought after by Malipur locals because of their taste and enhanced availability. The existence of an insect consumption culture in Manipur ensures that the nutritional needs of the indigenous people are met. Although the consumption of edible insects has sometimes been trivialized, they play a major role in food security, health, and environment management [Shantibala et al. 2014].

These are just a few illustrations to show that entomophagy is worthy of our attention. The full list of instances of entomophagy is, of course, much longer. Insect consumption is by no means exceptional. It can only grow in importance over the coming years and deserves to be scrutinzed and evaluated.

The review paper by Testa et al. [2017] also refers to the possible beneficial pharmacological effects of edible insect consumption. Several research teams have studied the possible use of edible ant-lions and edible moths. In developing countries, the number of diabetic patients related to insulin resistance is very high. The main reason for this is that nutrient consumption patterns have shifted from a healthy traditional high-fibre, low-fat, low-calorie diet towards the consumption of calorie-rich foods, containing refined carbohydrates, fats, red meats, and low fibre.  Mujahid et al. [2013] decided to study the hypoglycemic activity of the combination of bitter gourd or bitter melon (Momordica charantia) extract and ant-lion larvae (Myrmeleon sp.) extract in insulin-induced type 2 Diabetes Mellitus. Based on the results obtained in laboratory rat experiments, the authors concluded that the combination of bitter gourd and ant-lion extracts strongly reduced blood glucose levels.

Clanis bilineata is an edible and, incidentally, very beautiful moth and its larvae are widely consumed in China. In a study by Xia et al. [2013], chitooligosaccharides2 from larvae skins were prepared and their hypolipidemic activity was determined in rat experiments. The results of this study clearly indicated that chitooligosaccharides could be suitable alterative hypolipidemic sources for humans.

Another recent study highlights the potential of the desert locust, Schistocerca gregaria, as an unconventional source of dietary and therapeutic sterols3 [Cheseto et al. 2015].

Enghoff et al. [2014] suggest that the defensive secretions of millipedes act as potent insect repellents. Whether millipedes will ever become a major human food remains to be seen. Nevertheless, millipedes have been shown to constitute a valuable food source for an ever growing human population, especially in rural Africa. Additionally, the potential of millipede chemicals, such as cyanide and benzoquinones, for deterring (malaria transmitting) mosquitoes and for influencing Plasmodium and other parasites constitutes a promising field of research. Also, Tang et al. [2015] conﬁrmed that Chinese black ants contain chemicals that display anti-inﬂammatory, immunosuppressive, and renoprotective activities.

Currently, there is a buzz in the air, and it is all about the human practice of eating insects. Western governments are showing interest as there is huge potential for feeding growing numbers of humans  as well as their livestock and for doing so in a sustainable way. And we are beginning to see restaurants with insects on the menu.

We should not ignore the expansion of the world population; nor should we be blind to the benefits of entomophagy. The conventional livestock production is land and water thirsty, and this comes at a dramatic cost to our environment. Additional or alternative protein sources with lower environmental impacts should be seen as good news. We still have a lot to learn however. Many authors have already noted the need for ad hoc studies to determine the roles of anti-nutrients and their possible implications for animal health; and one of the most interesting ﬁndings is the use of insects as starting points for developing drugs. Potential hypocholesterolemic and hypoglycemic agents, derived from some insects, will definitely require additional efforts to determine their possible uses for human health. Likewise, the antioxidant characteristic exhibited by some insects requires in-depth research to standardize their use in many therapies.

The review by Testa et al. [2017] shows that the use of insects as food and feed appears to have many positive aspects from the economic, environmental and nutritional points of view — a challenge as well as an opportunity therefore for the 21st century. It is always a good time to invest in the future. It is always a good time to make a significant contribution to sustainability, to environmental quality, and to public health.

Hopefully, the financing agencies will be sympathetic to these concerns. Deafness and short-sightedness are no recipe for the future. A generous and open-minded attitude is what is needed to stimulate new developments.