Although essential to the balance of the global ecosystem, forests are under severe strain. Slash and burn fires destroy large sections of forests. But, as we are all aware, forests play a crucial role in the environment. They yield natural resources, provide valuable and even indispensable habitat for biodiversity, and they also influence the climate by storing carbon dioxide (CO2). Some believe raising new forests is an effective weapon to fight climate change and desertification [Peng et al. 2020]. The Intergovernmental Panel on Climate Change (IPCC) suggests that boosting the total area of the world’s forests, woodlands and woody savannahs could store around one-quarter of the atmospheric carbon (C) necessary to limit global warming to 1.5 C above preindustrial levels [IPCC 2018; Lewis et al. 2019].

For several years now, initiatives to help forests regain the land they have lost have multiplied all over the world: 350 million trees in Ethiopia, more than 66 million in India, 440 million to be planted in Ireland by 2040, one billion in Australia by 2050, etc. Madrid is planning a huge forest belt around the city. The Flemish Environment Minister, Zuhal Demir, recently decided to create 4000 hectares of new forest by 2024. She expects investments by the population. If only healthy natural forests – and not plantations – could enhance the Flemish landscape within three years!

Afforestation can be very helpful provided projects are properly designed and closely monitored. Several recent studies have looked at the impact of planting new forests. They reveal that ill-prepared initiatives can have counterproductive effects on biodiversity as well as on the fight against climate change [Férard 2020]. Forests require urgent, continuing and long-term care if they are to produce lasting environmental benefits.

Initiatives such as the Bonn Challenge and the Trillion Trees Vision address the intertwined challenges of rural poverty, climate change and biodiversity loss through large-scale afforestation and reforestation [Heilmayer et al. 2020]. The Bonn Challenge [www.bonnchallenge.org] is a global effort to restore 150 million hectares of the world’s degraded and deforested lands by 2020. Trillion Trees [www.trilliontrees.org] is a joint venture of Birdlife International, Wildlife Conservation Society and World Wide Fund for Nature, founded on a vision of a world where tree cover is expanding not shrinking.

Past policies and current commitments however indicate that governments mostly prioritise the planting of commercially valuable species over the restoration of natural forests. Although passive regeneration of natural forests may be an inexpensive and technically simple approach, government reforestation incentives have often favoured forests that produce wood for industrial uses [Rudel 2009]. For example, much of the growth has occurred in Asia where plantations that produce wood for local consumption remain highly important.

The Chilean subsidy policy, for example, led to the conversion of natural forest plots into plantations. In their study, Heilmayer et al. [2020] assessed the impact of afforestation subsidies and calculated the effects on C rates and biodiversity across the country. They took into account the extent of Chilean forests according to three scenarios – the scenario currently observed, a second scenario without subsidies and a third one with subsidies coupled with a better application of restrictions – and concluded that subsidies increased the area covered by trees but reduced the area occupied by natural forests, compared to the scenario without subsidies. As natural forests are better C sinks and richer in species than plantations, the policy failed to increase C storage. Moreover, it did not slow down the biodiversity loss. Chile’s forest subsidies probably decreased biodiversity without increasing total C stored in above–ground biomass, a missed opportunity to stop the dramatic climate change.

In order to predict the full-scale changes in the C cycle driven by afforestation Hong et al. [2020] looked more specifically at the impact of afforestation on soil C capture. Between 2012 and 2013, they collected thousands of soil samples from more than 600 pairs of reforested plots and control plots across northern China where the government has conducted extensive afforestation campaigns.

They found that planting trees did indeed appear to have increased SOC density when it previously showed low concentrations. In contrast, C rich soils seemed to have lost density with the planting of new plantations (for local wood utilisation). The authors suggest that their impact on C capture could be overestimated. This finding is of great importance to developers of afforestation projects. It clearly indicates that natural forest regeneration should be preferred to the planting of new trees where sites already feature non-negligible levels of  C in the soil.

In general, afforestation leads to more evapotranspiration, which leads to decreased near-surface temperature

Man–made as well as natural changes in land cover have a dual impact on climate. On the one hand, there are biogeochemical exchanges such as carbon dioxide emissions and storage, and on the other, there are biogeophysical effects due to changes in albedo, soil properties, and roughness. The biogeophysical effects include changes in radiation, evapotranspiration, and surface heat fluxes [Brovkin et al. 2013; Strandberg & Kjellström 2019]. The albedo effect generates colder temperatures as a consequence of deforestation, but this cooling effect is much smaller than the warming effect from greenhouse gas emissions. Moreover, biogeophysical parameters mainly have local effects. Hence, the response in climate can vary significantly between regions [Alexandru et al. 2016].

It is sometimes suggested that afforestation and reforestation measures could be taken into account in order not to reduce our quota of emissions. However, the outcome of these initiatives cannot be called an unqualified success. Earlier studies conducted with global (in other words, not on a regional or local scale) models at a coarse spatial resolution suggest that the albedo effect is the dominating biogeophysical effect leading to a colder climate when deforestation occurs in the Northern Hemisphere [Pongratz et al. 2009]. Currently, afforestation is considered as a mitigation strategy by CO2 sequestration, even though the reduced radiative forcing from reduced CO2 in the atmosphere might locally be counteracted by biogeophysical positive forcing [Mykleby et al. 2017; Strandberg & Kjellström 2019]. 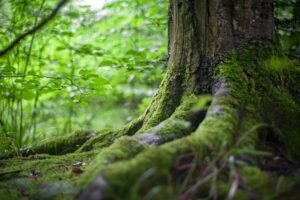 Brovkin et al. [2013]. Effect of Anthropogenic Land-Use and Land-Cover Changes on Climate and Land Carbon Storage in CMIP5 Projections for the Twenty-First Century, Journal of Climate 26, 6859 – 6881