A matter of all or nothing for every living organism

… Everything that has built modern human society is provided by nature and, increasingly, research demonstrates the natural world’s incalculable importance to our health, wealth, food and security… [Grooten & Almond 2018].

The World Wildlife Fund has released its annual Living Planet Report and it makes quite a depressing read. Wildlife populations, including mammals, reptiles, amphibians, birds and fish, have fallen by 60 % between 1970 and 2014. This represents a staggering and tragic loss of non-human life and ecological heritage. Moreover, the World Wildlife Fund emphasises that our health and food depend on biodiversity [Grooten & Almond 2018].

For many years we have known that we are driving the planet to the very brink. This is not a doom and gloom story, but shocking reality. The terrible decline in wildlife populations is a grim reminder and perhaps the ultimate indicator of the pressure we exert on planet Earth. Science was never clearer about the consequences of anthropogenic impacts. The current geological age, seen as the period during which human activity has been ¾ and still is ¾ the dominant influence on climate and the environment, is called the Anthropocene [Crutzen 2005; Lewis and Maslin 2015]. But science also provides us with the know-how and means to redefine and improve our relationship with the planet. Today, there is no longer any excuse for inaction. There cannot be a healthy, happy and prosperous future for people on a planet with a destabilised climate, depleted oceans and rivers, degraded land and empty forests, all stripped of biodiversity.

We have no reason at all to disagree with this, but framing the loss of wild species in terms of a threat to human civilisation and material well-being is a questionable proposition. The decline in animal populations, which is well documented by Grooten & Almond [2018], is highly tragic and painful news for nature and wildlife enthusiasts. And yet, Blomqvist [2019] claims that it is not clear whether the recent and huge losses of species and populations really constitute a threat to human material well-being. According to this author, overall well-being and quality of life are certainly affected, but the same may not be true for material well-being. For example, the world’s poorest and most vulnerable populations live in tropical regions such as the Congo Basin which are rich in biodiversity. At the same time, many Europeans are well-fed and enjoy high living standards, even though their landscapes have been significantly transformed and wild species populations have been serously depleted.

The author states that humans altered their environment to better serve their needs, e.g. by converting natural habitats into cropland or by prefering easier to breed cattle that provided more food and higher profits than the American bison and European wisent. As a result, he has a hard time arguing in good faith that further wildlife losses per se would prove catastrophic to the material basis of societies [Blomqvist 2019].

Obviously, a delicate balance must exist between all living organisms in order to sustain healthy ecosystems. This balance however has been upset by human involvement, and there are many forces driving this unprecedented destruction.

Many human activities and developments generate dramatic pollution. Waterways are polluted with the runoff from manufacturing facilities, factory farms, and the gas and oil that collects on roadways. Mining practices discard unusable heavy metals and minerals into soils and water sources [Mandal & Suzuki 2002; Hanna-Attisha et al. 2016]. Air is polluted by the fumes from traffic and burning fossil fuels. Pesticides sprayed onto crops inadvertently kill other plant species as well as animals living in the fields. Of all anthropogenic drivers that affect pollinators and pollination, the spraying of pesticides can substantially damage the survival of bee colonies [Kerr 2017]. Garbage and litter disposal fills the land with non-biodegradable plastics that will eventually be consumed by animals on land and in sea and ultimately by humans [Rainieri & Barranco 2019]. All of these reasons explain why pollution is directly responsible for the loss of wildlife biodiversity. Moreover, all greenhouse gases released into the air not only have a direct impact on the quality of air and water, but also lead to increased global temperatures, natural disasters, and glacial melting [Pussemier & Goeyens 2017]. Global climate change also exterminates the planet’s wildlife.

Metals and minerals, fumes, pesticides, micro-plastics, greenhouse gases, etc. are chemical substances. They are molecules and cannot distinguish between humans and animals. They affect all the living beings they encounter.

It is obvious that nobody wants to fall ill. Exposure to environmental pollution however remains a major source of health risk the world over [Briggs 2003]. Metabolic disease rates have increased dramatically over the last four decades. Classic understanding of metabolic physiology has attributed these global trends to decreased physical activity and caloric excess. But these traditional risk factors cannot explain the magnitude and speed of metabolic health deterioration [Sargis et al. 2019]. Recently, the part played by environmental metabolism-disrupting chemicals (MDC) in causing various metabolic diseases (including obesity, diabetes, non-alcoholic fatty liver disease, and neuro-behavioural abnormalities) is beginning to be recognised. As the burgeoning body of evidence matures, various organic as well as inorganic MDC of human and natural origin are now being considered as metabolic disease risk factors.

Recognition of these formerly under-appreciated metabolic stressors must now lead to efforts to mitigate the devastating consequences of metabolic disease by addressing environmental drivers of disease risk. So far, there have been insufficient adequate recommendations to reduce exposures or mitigate the effects of exposure on disease outcomes. 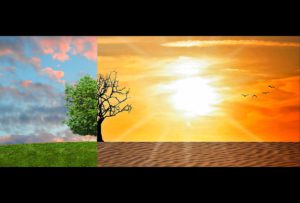 This can only be described as a vital challenge for the future and well-being of all populations including humans! Today, the Belgian youth has taken to the streets for a better climate and Belgian politicians are doing their utmost to show that they too are concerned. Hopefully, they will now understand that climate change is so much more than global warming and a rising sea level.

Crutzen [2006]. The “anthropocene”, in Earth system science in the anthropocene, Springer, Berlin, Heidelberg, 13 – 18