Plastic rain, we can no longer avoid it

Eleven billion metric tons of plastic are projected to accumulate in the environment by 2025. Because plastics are persistent, they fragment into pieces that are susceptible to wind entrainment [Brahney et al. 2020].

The presence of plastic in the environment can no longer be denied. It has become a very frightening and global problem. Plastics have outgrown most man-made materials. The world produced ~348 million metric tons of plastic in 2017, and this number is growing every year by ~5 % [Geyer et al. 2017]. However, robust global information about their processing and end-of-life fate, is lacking. A large proportion of the production accumulates as waste in the environment. Need I remind you of the huge problem created by discarded cigarette ends and soft drink bottles. Moreover, progressive fragmentation leads to the presence of secondary plastics in terrestrial, freshwater, atmospheric, and marine environments. Extremely high resilience and longevity give plastics their quality and utility, but these same characteristics lead to the unrestrained accumulation of synthetic materials in nearly every ecosystem on the planet [Rochman 2018]. Micro and nano plastics are found where they are least expected. Here I refer to a few recent observations.

Microscopic fragments of plastic have invaded the farthest reaches of the sea, from the depths of the Mariana Trench to the freezing waters off Antarctica. Now, researchers have found that such microplastics have polluted the Pyrenees mountains, expanding plastic’s dominion to previously unknown heights. [Fox 2019].

Seemingly everywhere researchers have looked, they’ve found microplastics. They’re floating in ostensibly unspoiled air over the Pyrenees Mountains and swirling in sediments taken from the remote Barents Sea, where bottom-living creatures also have been found with microplastics in their bellies. Scientists even found microplastics in Arctic snow this summer. They’re also in our food supply: Avid mussel eaters could be consuming up to 11,000 microplastics a year, one study found. Tea lovers should be wary, too. A study published in late September found brewing methods caused a single plastic teabag to release about 11.6 billion microplastic and 3.1 billion nano plastic particles into the water [Pipkin 2020].

Chemical contaminants have spread to every corner of the earth. And this we have known for a long time! As long as 55 years ago significant DDT residues were found in Adelie penguins and crabeater seals from Antarctica [Sladen et al. 1966]. DDT as well as many other pesticides must be very resistant as they are found at several thousand kilometres from the areas where they were used. And there is also the hole in the ozone layer. Since the mid-1980s it has been known that chlorofluorocarbons as well as halocarbons (compounds where carbon atoms are linked to fluorine, chlorine, bromine, or iodine, but also to hydrogen) are mainly responsible for the destruction of the ozone layer in the stratosphere [Dameris 2010]. Chemicals that were synthesised and utilised on earth can easily travel to the stratosphere, the layer of the earth’s atmosphere that lies between 10 and 50 kilometres above the earth.

Chemical contaminants are long-distance travellers, as are micro and nano plastics. Allen et al. [2019] analysed samples, taken over five months, at the Bernadouze meteorological station in the Pyrenees mountains and identified fibres up to ~750 µm long and microplastic fragments ≤300 µm. The researchers predominantly found plastics from single-use packaging. Moreover, from their samples, they determined that each day, an average of ~365 plastic particles sifted down from above into the square meter surface of the collection device. If comparable quantities of airborne microplastic fall across the rest of the country, these researchers estimate that roughly 2000 tons (or 2 million kilograms) of plastic blanket France each year. And their computer simulations corroborated the notion that the plastic fragments, films, and fibres collected could have originated in cities, suggesting the microplastics floated at least hundreds of kilometres before falling back to Earth.

And the situation is no more encouraging on the other side of the Atlantic. Looking at samples from 11 remote areas in the western United States, including the Grand Canyon and Joshua Tree National Park, Brahney et al. [2020] noticed brightly coloured fragments under the microscope. In fact, they were looking at plastic. They found a great deal of tiny fibres, probably from clothes, carpets, and other textiles. Additionally, they found tiny particles, about 30 % of which were brightly coloured spheres, smaller than the plastic microbeads that are used in cosmetics and other personal care products. These spheres are components of paints that might be released to the atmosphere during spray painting, a whole new source that so far has not been looked into.

The American research team estimated that ~132 pieces of microplastic land on every square meter of wilderness each day. This adds up to more than 1000 tons of plastic per year across national parks and other protected areas of the western United States, the equivalent of 300 million plastic water bottles. Furthermore, the authors say that most of the plastic probably comes from more distant locations, brought in via rain and high altitude winds. 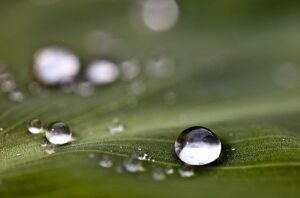 Image by Bronisław Dróżka from Pixabay

Trying to understand the patterns and processes of how microplastics move around the globe is only just beginning. However, pieces of plastic small enough to sail into the atmosphere and end up in the deepest ocean trenches or in very remote terrestrial environments are virtually impossible to clean up.