A Few weeks ago, the Plastic Attack action received tremendous media coverage. Newspaper articles and television news bulletins showed supermarket customers tearing off the packagings of the consumables they had bought and dumping them in bins at the exit. Is the use of packaging redundant? Will it soon be banned?

Admittedly, we face a problem – a very old problem. It emerged years ago. The militant and engaged artist, Clay Apenouvon, became fascinated by plastic, and in 2010 he created his concept Plastic Attack. This concept was meant to raise awareness of the worldwide, environmental danger and harm caused by plastic. In his work, Apenouvon sought to express the concept of plastic “fatal beauty” [http://africanah.org/clay-apenouvon-togo/].

Packaging is the encasement of products in packages – Packaging includes protective wrappings and other external coverings that can provide protection, information, security and marketing benefits. Finding another material or object that achieves excellence in all four aspects will not be easy.

The basic benefit of packaging is to protect the packed goods (food as well as non-food) prior to their sale. It prevents damage during transport and storage. Food packaging also significantly contributes to the hygienic transportation and storage of various foods and drinks. Packaging reduces exposure to both chemical and microbiological contaminants, which can cause food poisoning or foodborne diseases[1]. Some packagings or packaging systems also actively prolong the shelf life of various foods and drinks, e.g. modified atmosphere packaging, active packaging, etc.

Packagings also provide information regarding contents, usually the factual, legally mandatory or promotional information. Packagings are also in the front line when it comes to marketing. They provide a marketing opportunity by attracting customers to the product and by demonstrating the product’s attributes. Through design and appropriate communication, packages can differentiate a product from similar products produced by competitors and help sell them. Well designed, impressive packagings can be of great help in high profile promotion of packed goods.

Packages are sometimes designed for containment: products (or objects) that contain multiple items use appropriate packagings to keep everything together before the items are displayed in the shop. Product containment can also allow a product to be sold in larger quantities. Also, product security depends on the packaging. Correct packaging procedures make items tamper-resistant; they can help reduce theft, and can help prevent harm from dangerous products.

Packagings provide protection, information, security and marketing benefits. Contemporary life has become unthinkable without packaging. Shouting from the rooftops that packaging must be banned may be short-sighted, but it is nevertheless important to recognize that we face a complex and global problem.

The message is: Stop littering! – Consumer packaging accounts for very large quantities of waste. Disposing of (food) packaging introduces waste into the ecosystem, which produces a great many negative effects.

Litter is small waste that is left outside, either consciously or unconsciously, in places where it does not belong. Cigarette butts, chewing gum, food waste, packagings, cans, bottles, drinking cups, tickets, umbrellas, handkerchiefs, etc. are all examples of litter. Even though the problem has been known for over a century (Figure 1), the warnings have not always been taken seriously. Did you know it takes some 75 – 80 years to degrade a discarded empty bag of crisps? And did you know that the complete breakdown of a PET bottle takes ~500 years? 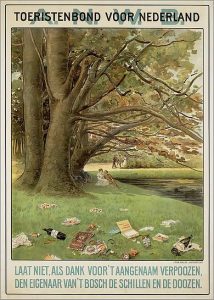 Figure 1. After you have enjoyed the forest, do not leave fruit peels and boxes for the owner [ANWB, The Netherlands 1903]

Littering does not only cause irritation; cleaning up the mess also costs a great deal of money. The litter clean-up in Flanders costs over 60 million euros per year, which corresponds to almost 10 euros per inhabitant [https://www.vlaanderen.be/nl/natuur-en-milieu/afval/zwerfvuil-en-sluikstort]. And a lot of work remains to be done. Despite government efforts, there are still masses of waste on our streets and motorways. Generating awareness is the most important step in the fight against littering. All of us can play a role in protecting the environment by changing our behaviour as consumers, says Jan Verheyen, spokesman OVAM (Openbare Vlaamse Afvalstoffenmaatschappij, Public Waste Agency of Flanders).

The litter build-up is not so much a regional problem as it is a global problem. We have all seen the pictures of the Great Pacific garbage patch (GPGP) or Pacific trash vortex, the gyre of marine debris particles in the central North Pacific Ocean that was discovered as long as 30 years ago. The oceanic garbage build-up is a highly complex and very worrying unsolved problem. Lebreton et al. [2018] confirm that ocean plastic pollution within the GPGP is increasing exponentially and pollution build-up occurs at a faster rate than in surrounding waters.

Moreover, garbage is both visible and invisible. It consists predominantly of small, suspended, often microscopic particles in the upper water column. Sometimes larger pieces of plastic float around in the water, and fish, sea birds, and mammals mistake them for food. When the animals eat the plastic, their bodies cannot digest it providing the animal with a sensation of satiety. The animal then stops eating and soon dies of starvation. The fatal beauty of non-degradable plastic!

And, what we cannot see is even worse. Micro- and nanoplastics are ubiquitous, in marine as in freshwater ecosystems [Horton et al. 2017], with microplastics found in places as far-flung as a Mongolian mountain lake and in deep sea sediments. The major concern is that they are ingested by a number of aquatic biota, especially the filter feeders like molluscs, mussels, oysters, from where they enter the food chain, all of which could have physical and toxicological effects on aquatic organisms and on the final consumers, i.e. the oyster and mussel lovers. Our much appreciated seafood contaminated by microplastics! That in itself is a serious problem; but there is more, much more than that. Microplastics are everywhere: on land, but also in the air we breathe, in the water we drink and in all the food we eat. It is very disturbing to learn that the food we eat contains microplastics from distant sources as well as from the immediate environment and house dust [Catarino et al. 2018]. We are surrounded by invisible pieces of waste, and exposed to all kinds of unpleasant consequences.

Is it too late? – Every year, an estimated 8 million tons of plastic end up in the ocean, and the figure should rise to ~60 tons per minute (double) by 2050 if today’s plastic use and lack of adequate waste management continue. The problem of ocean plastic is huge. Yet, despite everything, there is no reason to lose heart. I summarize the 8 essential steps that are required for efficient action. For more information I suggest you visit the World Economic Forum website [Jensen 2018]:

Make a feedstock out of waste – Looking beyond the current take-make-dispose extractive industrial model, circular economy aims to redefine growth, focusing on positive society-wide benefits. It entails gradually decoupling economic activity from the consumption of finite resources such as fossil fuel, and designing waste out of the system [Ellen MacArthur Foundation 2017].

Europe is well placed to take a leading role in the transition to the plastics of the future. Its strategy [EC 2018] determines the foundations of a renewed plastics economy, where the design and production of plastics and plastic products fully respect reuse, repair and recycling needs, and where more sustainable materials are developed and promoted. This will deliver greater added value and prosperity in Europe and boost innovation as long as there is fair (governmental) financing; it will curb plastic pollution and its adverse impact on our environment and well-being. Yet, all stakeholders including the private sector, together with national and regional authorities, cities and citizens, will need to mobilise, since reuse and recycling of end-of-life plastics is still very low; much lower than for other materials such as paper, glass or metals. Still ~95 % of the value of plastic packaging materials, i.e. between 70 and 105 billion euros annually, is lost after a very short first-use cycle.

Rethinking and improving the functioning of a complex value chain requires effort and increased cooperation between all the key players, including the plastics producers and recyclers, the retailers and the consumers. It also calls for innovation and a shared vision to drive investment in the right direction. Increasing the sustainability of the plastics industry can generate new opportunities for innovation, competitiveness and job creation, in line with the objectives pursued by the European strategy [EC 2018].

Trashing excess packaging after purchase is no more than a drop in the ocean. Rethinking and improving, whereby bioplastics can act as protagonists, will shape our future. At a time when there is so much talk about circular economy, we should now turn words into action and fatal beauty into beneficial opportunity.

European Commission [2018], A European Strategy for Plastics in a Circular Economy, pp. 18

[1] Strictly speaking, the term “food poisoning” refers to consumption of foods that contain a toxin or poison. The key point is that the multiplication of bacteria to harmful levels takes place prior to consuming the contaminated food. In foodborne diseases, the food or water only acts as a vehicle for the disease to enter the body. The multiplication then takes place within the body where it spreads and remains for weeks or even months, potentially causing serious damage and even death.