Jellyfish are edible, but will we eat them?

Contrary to the dystopian future drained of humanity that is imagined by many, the combined force of Personalised Optimisation and Farming Impossible Environments carve a path for how we can cut food waste, bring deserts back to life and celebrate our humanity through the act of eating. This will bring about a renaissance of planet Earth by reconnecting to our environment, and to each other.

This impressive and hopeful message from Claire Hughes, Head of Quality and Innovation at Sainsbury’s [2019] was published by the supermarket to mark its 150th birthday. It paints a picture of life in 2025, 2050 and in 150 years. It also predicts the evolution of food for the next 150 years: jellyfish for dinner, grow your own meat kits, nutrition patches and drips, and drone-delivered fruit ordered by your personal robot assistant at the level of ripeness you desire are just some of the striking trends that developing food businesses need to be aware of.

Among the most eye-catching developments is jellyfish, which together with other “invasive species” will soon be found at the fish counter. Given their exceptional combination of traits, it is surprising that jellyfish have not already taken over the world. Until now, they have been kept in check by marine predators that eat the jellies. Seabirds, sea turtles, marine mammals, fish, and even other jellyfish have developed methods for overcoming the jellies’ defensive stings and so take advantage of the abundant and accessible food source they represent. However, overfishing of predatory species such as red tuna and swordfish can result in population increases further down the food chain. With many of their predators in decline, jellies are freed from the predation that otherwise keeps their numbers low [Kirby et al. 2009].

Meanwhile, jellyfish are uniquely poised to benefit from changing ocean conditions. Jellyfish can lie as polyps on the ocean floor for years, spawning only when conditions are optimal. Higher ocean temperatures mean that favourable reproductive conditions that formerly occurred rarely now occur more frequently. And then, there’s the issue of oxygen. In many parts of the ocean, excessive richness of agricultural nutrients causes a dense growth of plant life (eutrophication). This depletes some oceanic waters of oxygen, when phytoplankton blooms collapse, and creates dead zones. Most marine life, apart from jellyfish, cannot survive in an oxygen-deprived environment. Jellyfish are able to survive on very little oxygen, and once jellies have taken over, their tendency to consume fish larvae makes it difficult for other species to re-colonize the area even after oxygen levels return to normal [Duarte et al. 2012].

Forget about potato chips, here come the jellyfish crisps! It appears that the floating gelatinous invertebrates can be leached of water to leave behind a thin, crispy wafer. It tastes of sea salt, or so they say!

In Asia, eating jellyfish – which for most western people is both highly surprising and repulsive – is a thousand-year-old tradition and is considered a gourmet delicacy [Hsieh et al. 2001]. The traditional method for preparing and processing jellyfish involves a month-long step-wise salting process using a mixture of sodium chloride and alum (potassium aluminium sulphate). During this process, the water content is reduced and the gel-like texture transforms into a rubber-like and crunchy texture, which gives the jellyfish their gastronomic value. Preserved jellyfish do not have much taste. So before serving, the salted jellyfish are rehydrated in water overnight and shredded. Served with vinegar, shredded jellyfish is a traditional Japanese appetizer [Hsieh et al. 2001]. Although eating jellyfish has been common in Japan, Korea, Thailand and China for at least a thousand years, jellyfish production has only recently become commercial. It now represents a multimillion dollar seafood business in Asia. 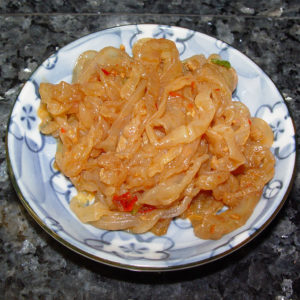 There are many differences between jellyfish species as well as many ways of achieving the best mouth-feel of the final product. It is important that the amount of salt, alum and dehydration be adjusted for each preparation batch, which is why jellyfish companies employ Jellyfish Masters whose task it is to fine-tune the preparation process. Detailed jellyfish recipes are often closely guarded secrets and only some rough guidelines are available.

Danish researchers [Pedersen et al. 2017] have suggested a new and simple method to preserve jellyfish without any addition of metal salts. After jellyfish had been immersed for two to three days in ethanol (96 %) and the ethanol had been evaporated at room temperature, paper-like jellyfish crisps were obtained. The Danish team have designed a simple method for turning jellyfish, which are rich in nutrients, including vitamin B12, magnesium, and iron, and low in calories, into satisfyingly crispy jellyfish chips.

Does this mean that we now have access to a regular nutrient-rich addition to our kitchen larder and a (new) basis for the abundant supply of dried ingredients and sauce mixes that is found on the supermarket shelves?

Is Asian cuisine about to enter western mainstream food practices? It seems the answer is yes. And yet, jellyfish will not be on the menu tomorrow even though it has started to attract the attention of a growing number of gastrophysicists in the west [Spence 2017]. Not only are jellyfish populations currently plentiful, they are also predicted to grow even more as global climate changes. Jellyfish may in fact be one of the few foods we could capture without harming the ocean.

Chef Youssef et al. [2019] wanted to illustrate how multisensory experience design can be used to introduce western diners to a new, highly-textured – if essentially flavourless – source of food. The dish is called “Ryunjin’s servant” after Ryunjin, the ancient Japanese god of the sea. In keeping with the Japanese theme, the jellyfish is marinated in a traditional seasoning called Chuka Kurage [Youssef et al. 2019]. Moreover, the jellyfish dish is placed on a table that is projection mapped with an underwater scene, accompanied by a bespoke soundscape delivered to diners wearing headphones.

No doubt a highly unusual experience! The authors’ hope is that by creating an enjoyable experience, diners in the West, who are not at all familiar with jellyfish dishes, will be “nudged” towards this highly sustainable food source. And they are right!

There are many reasons why jellyfish consumption should be encouraged: jellyfish intake is safe, even for allergic individuals, its organoleptic properties are acceptable [Raposo et al. 2018] and yes, jellyfish is nutritious [Yusuf et al. 2018].

Pedersen et al. [2017]. On the gastrophysics of jellyfish preparation, International Journal of Gastronomy and Food Science 9, 34 – 38