Is it really bad for your health to eat red and processed meat? It seems as though what was considered dangerous has now become safe. Or is there a darker side to the story?

In October 2015, 22 scientists from 10 countries met at the International Agency for Research on Cancer (IARC) to evaluate the carcinogenicity of red meat and processed meat consumption. Their alarming conclusions were published in volume 114 of the IARC Monographs: consumption of processed meat is classified as carcinogenic to humans (Group 1) on the basis of sufficient evidence for colorectal cancer, and consumption of red meat is classified as probably carcinogenic to humans (Group 2A). 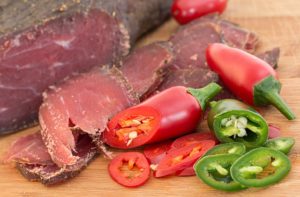 Red meat refers to unprocessed mammalian muscle meat – beef, veal, pork, lamb, mutton, horse, or goat – including minced or frozen meat. It is often consumed cooked. Processed meat refers to meat that has been transformed through salting, curing, fermentation, smoking as well as other processes that enhance flavour or improve preservation. Most processed meats contain pork or beef, but might also contain other red meats, poultry, offal (e.g. liver), or meat byproducts such as blood [Bouvard et al. 2015].

Red meat contains valuable proteins and important micronutrients such as B vitamins, iron, and zinc. Its fat content varies depending on animal species, age, sex, breed, feed, as well as the cut of the meat. Meat processing, such as curing and smoking, can result in the formation of carcinogenic chemicals, including N-nitroso-compounds and polycyclic aromatic hydrocarbons (PAH). Cooking improves the digestibility and palatability of meat, but can also produce known or suspected carcinogens, including heterocyclic aromatic amines and PAH. High-temperature cooking by panfrying, grilling, or barbecuing generally produces the highest amounts of these contaminants.

No need to cut down on red and processed meat for health reasons, controversial findings suggest

Several prominent nutrition scientists and health organizations criticised the study’s methods and findings. But Johnston and his colleagues defended their work, saying it relied on the highest standards of scientific evidence. Moreover, they emphasised that the large team of investigators reported no conflicts of interest and conducted the review without outside funding.

But what the study conveniently forgot to mention is that its lead author has past research ties to the meat and food industry. Could this really have been a slip of his mind?

Parker-Pope & O’Connor [2019] wrote that the authors of the paper defended their work, emphasising that the large team of investigators reported no conflicts of interest and conducted the review without external funding.

However, a few years earlier Johnston was the major (last) author working on a similar study that tried to discredit international health guidelines advising people to eat less sugar. The study concluded that: Guidelines on dietary sugar do not meet criteria for trustworthy recommendations and are based on low-quality evidence. Public health officials (when promulgating these recommendations) and their public audience (when considering dietary behavior) should be aware of these limitations. It also appeared in the Annals of Internal Medicine [Erickson et al. 2017] and was paid for by the International Life Sciences Institute (ILSI), an industry trade group that is largely supported by agribusiness as well as food and pharmaceutical companies [Parker-Pope & O’Connor 2019].

The ILSI-funded sugar study suggests (and also evidences) that ILSI has methodically cultivated allies in academia around the world; it shows how influential scientists are recruited to help shape global nutrition advice and call into question what it perceives to be anti-food industry guidelines by health organisations. When Johnston and his colleagues published the sugar study, they claimed that ILSI had no direct role in conducting the research other than providing funding. They later amended their disclosure statement after the Associated Press obtained emails, showing that ILSI had “reviewed” and “approved” the study’s protocol [Parker-Pope & O’Connor 2019].

Even if ILSI had nothing to do with the meat study, the fact remains that the authors have lost all credibility by providing incomplete disclosures. It is always better to fully disclose, if for no other reason than to stay out of trouble when undisclosed conflicts become known.

When one research group says the opposite of another

All too often people think that science creates certainties. In other words, if there is no certainty, then we are inclined to think that the scientific conclusions are wrong or at the very least incomplete. Science, however, is dynamic, it does not provide absolute certainties, but only the best possible expert consensus. This can be misused by those scientists who question the best contemporary scientific evidence and spread confusion on several crucial topics, including the safety of our food products, beverages and other consumer goods. This is the story of the merchants of doubt [Oreskes & Conway 2010].

Should companies and – worse still –  multinationals be allowed to lie to consumers? Can companies, industry trade groups and other lobby groups misrepresent or withhold relevant information? Needless to say that if all of us behaved in such a manner, the very concept of promise would lose all its substance and if everyone lied, any reliable information exchange would become impossible. Which is why to lie is immoral, because it falls short of society’s standards of what is considered acceptable and honest behaviour.

Could there also be another, hidden explanation? Could the idea be to keep the controversy alive? So long as there is some doubt about the causal link, the industry would be safe from regulation and litigation. To steadfastly deny the existence of scientific agreement may well be seen as a very profitable attitude!