Cinnamon has been known since ancient times. It received much attention in China as is witnessed by its entry in the ancient books on Chinese botanical medicine (dated ~2700 AD), attributed to the mythical Chinese sovereign Shennong. In Ayurveda, the Hindu health doctrine from India, cinnamon is recommended for the treatment of diabetes and indisposition. Ancient Egyptians used it for beverage flavouring and in medicines, but also as an ingredient for the preparation of embalming agents. It was treasured and considered even more precious than gold [Goeyens  2014].

As described in the Old Testament, cinnamon was also an essential ingredient of a holy anointing oil for the tabernacle: … The Lord said to Moses “Take the finest spices: of liquid myrrh 500 shekels, and of sweet-smelling cinnamon half as much, that is, 250, and 250 of aromatic cane, and 500 of cassia, according to the shekel of the sanctuary, and a hin of olive oil. And you shall make of these asacred anointing oil blended as by the perfumer; it shall be a holy anointing oil… [Exodus 30, 22 – 29].

Years ago, I came across an article by Montero-Prado et al. [2011] in which the authors demonstrate how the processing of cinnamon essential oil (EO) into plastic packaging and labelling materials extends the shelf life of the succulent, yellow Calanda peach. Peaches with Calanda Peach Certificate of Origin owe their market fame to their exceptional flavour and sweetness. Every single peach is bagged on the tree for the last 2 months of growth to allow the fruit to ripen inside a protective “pouch”. This guarantees its purity since the bag virtually prevents any contact between the fruit and phytosanitary or other chemical agents. Moreover, “cinnamon-rich” packaging can achieve a significantly longer shelf life. For my tutorials I have often used this application to illustrate active packaging. Active packaging materials and objects are intended to extend the shelf-life and/or maintain or improve the condition of packaged food. They are generally designed to deliberately incorporate components  that release substances into the packaged food or its surrounding environment.

Since first reading about cinnamon and the Calanda peach, I have been fascinated by the exceptional properties of the spice and its many beneficial applications. The unique healing abilities of cinnamon EOs come from three major chemical components, i.e. cinnamaldehyde, cinnamyl acetate and cinnamyl alcohol. However, since EOs are highly complex, multi-component mixtures, it is quite possible that a wide range of other volatile substances adds to the favourable health effects [Bakkali et al. 2008].

Many developing countries, particularly in South Asia, are witnessing an alarming increase in the prevalence of type 2 diabetes and cardiovascular disease. Economic, dietary and a number of other lifestyle changes have been occurring rapidly in most South Asian countries, making their populations more vulnerable to developing type 2 diabetes and cardiovascular diseases. Recent data show a significantly increasing prevalence in urban areas, but also in semi-urban and rural areas. Prime determinants for type 2 diabetes in South Asian populations include physical inactivity due to  urbanisation and mechanisation, imbalanced diets, abdominal obesity, excess hepatic fat as well as inadequate perinatal and early life nutrition [Misra et al. 2014].

Metabolic syndrome is a cluster of conditions —  including increased blood pressure, high blood sugar, excess body fat around the waist, and abnormal cholesterol or triglyceride levels  —  that seriously increases the risk of heart disease, stroke and diabetes. Individuals with metabolic syndrome are 5 times more at risk of developing type 2 diabetes and 3 times more likely to suffer a heart attack or stroke compared to people without the syndrome [Paoletti et al. 2006]. These individuals are also two times more likely to die from type 2 diabetes and a heart attack or stroke. Metabolic syndrome affects 20 to 30 % of urban city dwellers in India.

The question, then, is could a simple means offer an affordable solution? The recent publication by Jain et al. [2017] includes a strong, positive message: cinnamon supplements alleviate metabolic syndrome.

According to a trial led by the University of Delhi, regular cinnamon supplementation counters all aspects of metabolic syndrome in Indian adults. Previous investigations suggested a potential role of cinnamon and its components in improving insulin sensitivity. For example, it has already been reported that cinnamate, a phenolic compound found in the inner bark of cinnamon trees, provides protection against lipemic-oxidative disorder. Moreover, it acts as a hypocholesterolemic (cinnamon lowers the cholesterol levels), and hepatoprotective (cinnamon suppresses lipid peroxidation by enhancing antioxidant enzyme activity in the liver) agent in laboratory rats on a high-fat diet [Amin et al. 2009]. 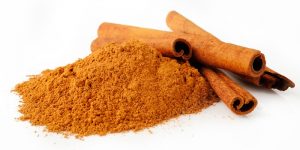 Cinnamon bark is peeled and laid in the sun to dry where it curls up into rolls known as cinnamon sticks; it can also be obtained ground into a powder

Hence, a 16-week randomised controlled trial was conducted with 116 Asian Indian subjects (64 men and 52 women), who had metabolic syndrome. They were divided into two groups. Participants in the first group were given 2.5 g of a wheat flour each day as a placebo, and in the second group, each participant received 3 g of powdered cinnamon daily. Both the wheat flour as well as the cinnamon were administered in capsule form.

Compared to the placebo group, the subjects of the cinnamon intervention group experienced greater weight loss and increase of High-density lipoprotein (HDL or good) cholesterol, as well as a pronounced decrease in waist circumference, Low-density lipoprotein (LDL or bad) and total cholesterol, systolic and diastolic blood pressure, and body fat percentage. Additionally, the aqueous extract of cinnamon stem bark has been shown to reduce sucrose-induced elevation in systolic blood pressure of spontaneously hypertensive rats, as well as lower diastolic and systolic blood pressure in pre-diabetic and diabetic humans.

The results of the latter study are very promising. The authors [Jain et al. 2017] show obvious decreases in measures of glycemia, adiposity including abdominal obesity, lipids, and blood pressure. The percentage of individuals with metabolic syndrome was significantly decreased with a single cinnamon nutrient intervention.

Cinnamon adds depth and warmth to sweet and savory dishes. Cinnamon quills or sticks are prominently present in cookbooks and kitchen bibles. Everyone is familiar with the essential ingredient of cinnamon rolls, apple stuffed chicken breast, cinnamon pork loin, nectarine chutney, acorn squash stuffed with apples, banana cake with cinnamon glaze and hundreds of other recipes.

Cinnamon is a prime ingredient in sweets and baked dishes. It is also an unobtrusive, but much appreciated addition to marinades, beverages, dressings, meat and fish. Guyana’s national pepper pot is a stewed beef dish, strongly flavoured with cinnamon, hot peppers and cassareep, a special sauce made from the Cassava root. Egyptian Luqmat al-Qadi are small, round and crunchy donuts served with dusted cinnamon and powdered sugar. In Mexico, cinnamon is added as a flavouring agent to chocolate.

Many exclusive liqueurs and bitters also contain cinnamon. It is said that the monks of the Benedictine Abbey of Fécamp in French Normandy have developed a medicinal aromatic herbal beverage. In fact, it was Alexander the Great who invented the recipe himself, with the help of a local chemist [Wikipedia]. The exact list of herbs and their proper proportions are closely guarded trade secrets, but cinnamon is obviously one of the ingredients of the herbal drink Bénédictine.

As was to be expected, cinnamon became a favourite household spice. It has been used throughout the world for centuries. Cinnamon has a very pleasant flavour and a warm smell, which has made it very popular in cooking, baking, curries and all kinds of drinks.

More surprisingly maybe, cinnamon was also once traded as a currency. During the first century AD, the Roman author Pliny the Elder wrote of 350 grams of cinnamon as being equal in value to over five kilograms of silver.

Should preference be given to cinnamon-rich dishes ? While the results of the study by Jain et al. [2017] are very promising, they should be tested in a larger sample over a longer period of time. Clearly, the end of the chosen path is not yet in sight. It would be a serious mistake, however, to disregard such an interesting and promising development.

This being said, I would certainly not recommend consuming large quantities of cinnamon. Cinnamon can have several dangerous medical side effects, because of the coumarin it contains which when ingested in excessive amounts could cause serious health problems [Iwata et al. 2016]. Coumarin is a naturally occurring flavouring substance in cinnamon and many other plants. It is hepatotoxic, thins the blood and causes cancer in rodents. Fotland et al. [2011] established a new Tolerable Daily Intake (TDI) for coumarin of 0.07 mg per kg of body weight. By using cinnamon on oatmeal or other cereals just a few times a week, it was estimated that the TDI in children and adults can be greatly exceeded. Moreover, these scientists claim that even a few weeks of ingesting high amounts of coumarin can have serious adverse effects.

Other undesirable substances in cinnamon are safrole and styrene. Normally, only traces of safrole are found in cinnamon. Higher concentrations are, however, common in oils from cinnamon leaves, which may be used for blending purposes with other cinnamon oils. Styrene is formed in cinnamon under unfavourable transport and storage conditions.

Research is four different things: brains with which to think, eyes with which to see, machines with which to measure and, fourth, money [Albert Szent-Gyorgyi, Nobel prize in Physiology or Medicine in 1937]. This can only come about through efficient co-operation between all actors: scientists, decision makers, industrialists and consumers.

So let us hope that all the thinking, seeing, measuring and financing will confirm the beneficial effects of cinnamon on human health!

Goeyens [2014]. Cinnamon has amazingly exceptional and beneficial properties, but we must be careful !, in Food and Packaging: a chemical spark, ACCO, Leuven