A growing appetite for fast food

Rather slow food than fast food! Michael Wolff, author of Fire and Fury, wrote “Sometimes Trump would have a 6:30 p.m. meeting with former chief strategist Steve Bannon, but if not, more to his liking, he was in bed by that time with a cheeseburger, watching his three screens and making phone calls.” This may sound like a nice relaxing evening for M. Average, but it is hardly the behaviour one would expect from a Head of State. Moreover, if all this is true, I have serious reservations about the eating habits of US president Trump. Are burgers really trumps?

Surely, we should not follow President Trump’s example. Recent scientific literature reinforces the link between fast food and bad cholesterol.

Never before have so many people watched so many entertaining cooking shows on television and read so much gastronomic writing, but never before have so many people spent so little time cooking food. Highly sophisticated kitchens do not necessarily imply healthy cooking! Fast food consumption has increased enormously during the last decades [Xue et al. 2016] and the increase is likely to continue. Globally, fast food generates significantly increasing revenues every year [Franchise Help 2018]. For example, the US economy hasn’t jumped by more than 3 % a year in the last 10 years, but the burger business is seriously booming. McDonald’s, Burger King, and Wendy’s reported a same-store sales jump of >3.2 % [Kramer 2017]. However, the increasing trend is not without consequence. Out-of-home foods (takeaway, take-out and fast foods) have become increasingly popular in recent decades and are thought to be a key driver in increasing levels of overweight and obesity due to their unfavourable nutritional content, the study by Janssen et al. [2017] concludes. Fast food mainly defines foods from national/multinational fast food chains, such as McDonald’s, Burger King, Pizza Hut, and can also include dining in. There are over 200 000 fast food restaurants in the US and it is estimated that 50 million Americans visit them every single day. In England, there are some 56 000 fast food outlets, representing more than a quarter of all restaurants.

Obesity has become endemic in many countries of the world, and it is suggested that diets commonly contain an overabundance of energy-dense food products. Most notably, obese people adopt modern, “westernized” diets and lifestyles. There is however no single reason why people eat out-of-home foods. The Janssen et al. [2017] study presents several key factors that influence fast food consumption. Many of them are intertwined. Economic weakness and financial instability of the consumer appear to be a strong determinant of access to out-of-home foods and consequent consumption. Additionally, the biological and psychological drives combined with a culture where overweight and obesity is becoming the norm have made it “fashionable” to consume out-of-home food.

Regular fast food consumption means more calories and fewer nutrients. Those who eat more than one takeaway meal per week (~28 % of subjects) have higher body fat mass and greater skinfold thickness than those who never or seldom consume them (~26 %), the investigation by Donin et al. [2017] explains. They also have higher total energy intake, higher percentage energy intake from both total and saturated fat, and higher energy density[1] from food intake. Regular fast food consumers also have lower protein, starch and micronutrient (vitamin C, folate and iron) intakes, suggesting a dietary pattern rich in calories, but poor in nutrients. The unhealthy dietary patterns could have undesirable health consequences, if continued into later life, the scientists warned [Donin et al. 2017]. Little is known about the associations between takeaway meal consumption and chronic disease risk markers in children. So shouldn’t our governments start considering more and better health protection initiatives to reverse the current trends in takeaway meal consumption and improve childhood diet and nutrition both at home and school?

Overall, there is a strong demand for further research into the out-of-home food phenomenon. To understand the complex interplay of biological, psychological, cultural and… determinants is essential to increase our knowledge of the factors responsible for out-of-home food consumption; to determine whether there are differences between countries; to assist in building up a coherent body of evidence; and to support the development of effective measures.

And if the potential health risks associated with the regular consumption of out-of-home food products do not put you off, then perhaps the environmental consequences will. Not only do fast food products affect your health, but it turns out that many are also bad for the environment. The whole chain of production has a considerable adverse influence [Pussemier & Goeyens 2017]. First, fast food stores sell an awful lot of meat. Most, if not all, of this meat is produced at factory farms (intensive cattle farming), which significantly contribute to greenhouse gas emissions and global warming. Second, most of these products are transported over long distances, further increasing their impact on air quality. They also have a negative effect on water quality, as pathogens, hormones, drugs, and the fertilizers they use for the cultivation of feed crops tend to seep into surrounding groundwater, potentially causing outbreaks of waterborne illness, fish kills, and other hazards. And finally, fast food restaurants also tend to use a lot of packaging. The overuse of wrappers, straws, bags, boxes, and plastic as well as ware is one of the biggest sources of urban litter and waterway and ocean contamination.

Just the once will not hurt. The occasional cheeseburger can do no harm. The same cannot be said about the daily cheeseburger in bed. The obesity epidemic shows no sign of abating. And there is a very urgent need to resist the environmental forces that are producing gradual weight gain, obesity and related diseases in the population.

Consumers must learn to adjust to sustainable food production and healthy food consumption. They must accept to pay slightly higher prices for better food products. It is a well-known fact that eating too much meat is not good for your health. But then, vegetarianism is good  for your health only when diets are well-balanced, when vegetarian dishes contain enough vitamins and essential amino acids. And we should all prefer unrefined and unprocessed food products [Satija et al. 2017] over ingredient-rich ready-made dishes and delicatessen.

We should prefer healthy food, which local and short supply chains can easily provide. A first move to slightly more expensive, but higher quality foods could be a giant step in the right direction in our pursuit of healthy food and sustainable food production. To change our eating habits would be good for us and good for the planet.

So what are we waiting for? 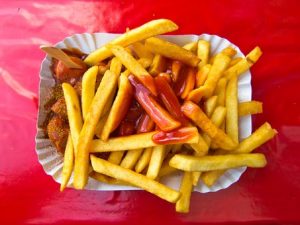 Satija et al. [2017]. Healthful and Unhealthful Plant-Based Diets and the Risk of Coronary Heart Disease in US Adults, Journal of the American College of Cardiology 70, 4, 411 – 422