Food and Packaging : a chemical spark 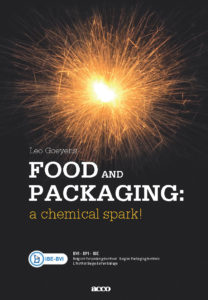 Many people have their own views on the chemical substances which are needed for the synthesis of packaging and food contact materials, though their views may be coloured by a number of factors. Chemicals can be a blessing and a curse.

The chapters of the book will provide a logical analysis of both the pros and cons of several chemical ingredients that are often found in packaging materials. The intention is not to publish an exhaustive list, but rather to elaborate on some striking examples. The application of chemicals in food contact materials sparked considerable discussion. However, current innovations of food packaging technology are geared to ensuring better and more efficient quality preservation and enhanced safety.

Here are some excerpts

…”Chicken feathers may fuel plastic revolution.” This was the striking title of a hot topics communication brought by several news agencies in April 2011. The focus was suddenly on one of the most abundant and generally unexploited non-food proteins : keratin, the major component of hair, feathers, nails and horns of mammals, birds and reptiles. According to the research team led by Professor Y. Yang of the University of Nebraska-Lincoln, chicken feathers could be the backbone of the next major plastics revolution …  [from the chapter on Keratins]

… There is more to ink than meets the eye. Inks for printing paper and cardboard are dispersions of synthetic organic pigments in a bonding agent, essentially composed of resins, vegetable oils and high boiling point mineral oil products. Mineral oils are used in printing ink formulations for different and often combinatory functions. These include carrying or dissolving the other components in the formulation such as the resin and the pigments, adjusting the viscosity and the rheological characteristics of the printing ink and being suitable for the drying mechanism of the ink during the printing process …[from the chapter on Mineral oil]

… The decision to ban bisphenol A (BPA) from baby bottles, combined with industry marketing campaigns, has convinced several consumers that the plastics currently used to store food are perfectly safe. Plastic baby bottles, spillproof cups and miniature cutlery are marked “BPA-free”, and many consumer products in the kitchenware aisle are also untainted by this chemical. At the supermarket checkout, customers may receive a BPA-free receipt. All of which may well induce a false sense of security. BPA is still a constituent of many food packaging materials, especially food cans. And when companies did abandon BPA, they oft en adopted substances that share the same chemistry and raise similar concerns as BPA. In many countries, BPA is also used to coat water supply pipes and the compound is found in dental sealants as well as in some medical and hospital devices including incubators for premature infants. These, then, constitute multiple unobtrusive exposure pathways that command our attention and require additional investigation … [from the chapter on BisphenolA]

… The use of a self-adhesive active label placed inside a macro-perforated PET tray offers an efficient option for extending the shelf-life of peach fruit at room temperature. The study convincingly demonstrates that it is preferable to use active labels containing cinnamon rather than cinnamon enriched plastic. Moreover, some physicochemical properties, such as loss of weight and firmness, were enhanced when active label-based packaging was used …[from the chapter on Cinnamon]